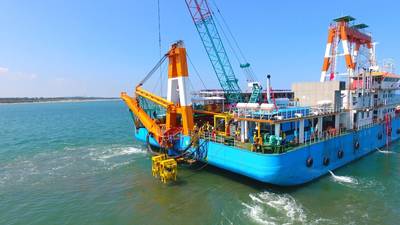 Experts from the mass/controlled flow excavation (M/CFE) provider deployed the shallow draft Twin R2000 tool to de-bury and retrench a cable for maintenance as part of the prominent Formosa 1 wind farm development for its client, cable lay contractor Woen Jinn Harbor (WJH).
The Twin R2000’s non-contact method and ability to operate in very shallow water depths was critical to the success of the excavation which was completed in 50 hours – ahead of schedule.
Formosa 1, near Miaoli on the west coast of Taiwan, is a 130MW wind farm and will be the country's first commercial-scale offshore wind project. The first two turbines went live earlier this year.
JFSE’s fleet of tools provides a non-contact form of excavation that eliminates the risks associated with other excavation methods. Further enhancing their capabilities, the tools have the additional benefit of real-time sonar imaging which enables precision excavation. The tools are used for applications including pipeline and cable trenching, de-burial, rock dump dispersal and seabed clearance and preparations. The M/CFE spreads are ideal for moving materials such as sand, silt and mud, drill cuttings, clay and rock dump.
This was JFSE’s first project in the emerging Asia Pacific renewables industry. Worldwide, it has completed more than 70 excavations at offshore wind farm sites.