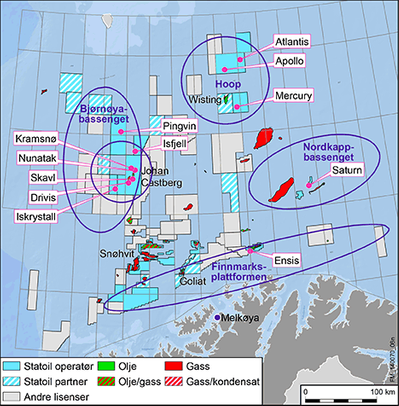 “This is a unique exploration programme. A commitment of this size and complexity requires geological, technological and organisational muscle, and the data collected are important for the future understanding of the oil and gas potential in the Barents Sea,” says Irene Rummelhoff, senior vice president for exploration on the Norwegian continental shelf.

“It has been argued that the exploration programme has had limited success. Indeed, we have made fewer commercial discoveries than we had hoped for. However, there are a number of things that I take pride in. We have tested a great variety of geological plays in frontier areas and dramatically increased our knowledge with the huge amount of subsurface data we have collected.  We have also demonstrated that we can operate in a safe and efficient manner in the remote parts of the Barents Sea.”

The three wells drilled in the Hoop area during the summer allowed to build important knowledge of this huge frontier area of the Barents Sea. We have confirmed a working petroleum system in Hoop, but need to work further to understand the migration and where the oil has accumulated.

The Hoop wells were the northernmost wells ever drilled on the NCS, over 300 kilometres from shore. These wells provided a lot of new learning when it comes to exploring remote northern areas and solving logistical and operational challenges related to it.
Bilde

Though the wells were drilled during the summer months when ice was several hundred kilometres away, we built important experience through developing an ice management plan which we will bring with us moving forward, not least for the 23rd concession round.

The last part of the exploration programme was designed to increase our understanding of the petroleum potential in different areas of the Barents Sea – the Finnmark platform, the Bjørnøya basin north of Johan Castberg, and the Nordkapp basin. We tested a number of new geological play models, and the Pingvin well northwest of Johan Castberg was a play-opener proving both hydrocarbons and a reservoir in a new unexplored area of the Barents Sea.

The exploration programme overall has been very efficient, especially the last seven wells drilled by the Transocean Spitsbergen drilling rig. These wells were drilled 40% faster than industry average for the Barents Sea, enabling two more wells than originally planned for to be drilled.

“Exploring in the Barents Sea is not a sprint, but a marathon. It is about long-term thinking, stamina and systematic building of knowledge. I see our 2013-2014 exploration programme as an important building block for the future of Barents Sea exploration.  Our focus next year will be to analyse the extensive data we have collected, interpret the 3D data from the joint seismic acquisition in the southeastern Barents Sea and decide on the way forward in the Barents Sea. We will also work hard to deliver a strong application in the 23rd concession round,” says Rummelhoff.
Bilde