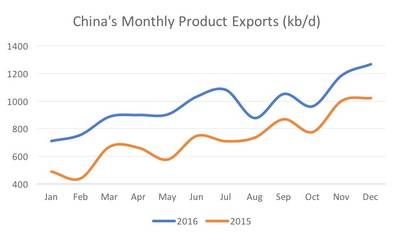 China’s product exports in December eclipsed yet another record set in November, up by 23.8 percent y-o-y and 10.3 percent m-o-m to hit 1.27 mmb/d. The surge in exports can be attributed to Chinese refiners’ attempts to fully utilize their leftover export quotas for the year, as well as destocking ahead of the nation-wide switch to China V emission standards. The boost in Chinese crude throughput was also a contributing factor, as refinery production hit a new high of 11.3 mmb/d (up by 3.7 percent y-o-y).

Chinese December diesel exports accounted for 431 kb/d (up by 81.6 percent y-o-y) while gasoline exports stood at 262 kb/d (up by 8.6 percent y-o-y). Rising Chinese exports lent support to the rebound in Medium Range (MR) tanker rates in December, which spiked by $2.43/T m-o-m for the AG/Japan route basis 35 kt. We expect the growth in Chinese product exports to ease in January from December’s highs ahead of firm domestic demand during the Lunar New Year. Increased travelling during the week-long holiday typically boosts domestic use of gasoline and jet fuel. This is likely to have limited any further rally in MR rates in January.
Crude imports into China broke another record in December, reaching 8.57 mmb/d (up by 9.6 percent y-o-y) due to increased buying ahead of the OPEC and non-OPEC deal to cut production in January. The Chinese government recently issued the first batch of crude import quotas for 2017, with around 918 kb/d allocated to independent refiners. This is around 40 percent less than the quota issued in 2016, which has raised many concerns regarding crude imports for this year.
However, it is worth noting that the teapot refiners imported an estimated 800-850 kb/d of crude for the whole of 2016, which is still less than the first batch of quotas for 2017. Furthermore, the first batch of quotas is calculated based on import volumes for January-October 2016, which implies that another batch is likely to follow later in the year. Also, this does not include quotas that may be granted to refiners who applied but have yet to receive them such as Henan Fengli Petrochemical. Overall, there is still room for teapot refiners to raise crude imports in 2017 amidst falling domestic production. Government policy remains the biggest risk in China as the independent refiners face increased scrutiny and tighter regulations.
The Author
Rachel Yew is a Singapore based commodity and freight research analyst at Ocean Freight Exchange.