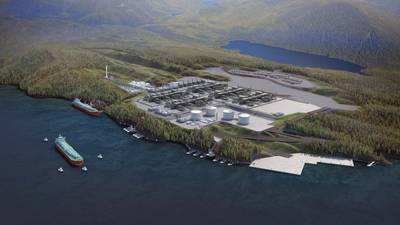 U.S. oil major Exxon Mobil Corp. has withdrawn its environmental assessment application for a $25-billion LNG export facility on the B.C. coast it proposed in 2015. No reasons given for withdrawing from environmental review process.

“After careful review, ExxonMobil Canada and Imperial Oil Resources have withdrawn the WCC LNG project from the B.C. Environmental Assessment process,” a notice on WCC LNG website says. It also says that its websie will only be available until the end of 2018.

According to a Reuters report, the decision to pare its LNG project portfolio follows the go-ahead of a giant Royal Dutch Shell-led project in British Columbia, and Exxon’s focus on LNG projects in Asia, the Middle East and the United States.

The apparent shelving of the project is a blow to the West Coast liquefied natural gas export industry which at one time featured about 20 proposals, but has resulted in only one firm commitment to build, said Canadaian Press.

The project had been proposed by Exxon and its Canadian partner, Imperial Oil Ltd., for Tuck Inlet in the Prince Rupert area on B.C.’s north coast.

According to the project website, it was planned to have an initial capacity of up to 15 million metric tonnes of LNG per year for shipment to international markets, with the potential to expand to approximately 30 million tonnes per year.

Global LNG demand is expected to double to 550 million tonnes per annum (mtpa) by 2030, as countries like China move away from coal to cleaner fuels. The top import market for LNG is northeast Asia.