No Felony Charges for Protesters Who Shut Houston Ship Channel 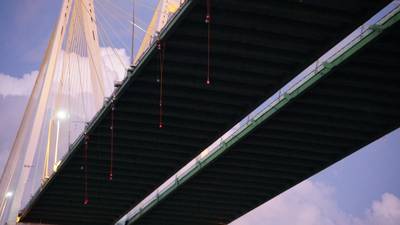 A Texas grand jury on Wednesday declined to issue felony indictments against a group of Greenpeace USA activists who closed a key oil export waterway for 18 hours last year by tying themselves to a Houston bridge and dangling over the water.

Felony charges had been brought against 31 activists involved in the September 2019 protest. The indictments, sought by the Harris County District Attorney's Office, were under Texas' new critical infrastructure law, which makes it a felony to interfere with oil and gas pipelines and ports, and other "critical infrastructure."

The Harris County jurors opted instead for 25 misdemeanor indictments for obstructing a highway or other passageway. Six cases were dismissed before submission and 22 people still face separate a federal misdemeanor charge for blocking a navigable waterway.

He said Greenpeace would continue to lay out the best defense for activists still facing misdemeanor charges.

The protest, timed around a nationally televised Democratic presidential debate in Houston last year and intended to bring attention to climate change, shut a portion of the Houston Ship Channel and blocked ship traffic to and major oil refineries and export terminals.

(Reporting by Liz Hampton in Denver; Editing by David Gregorio and Tom Brown)