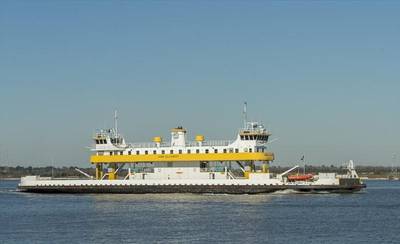 A ferry passenger who fell into the water off Galveston, Texas, was rescued on Monday, the U.S. Coast Guard said.

Coast Guard Sector Houston-Galveston command center watchstanders received a report at 11:30 a.m. over VHF-FM channel 16 from personnel aboard the John W. Johnson, a nearby passenger vessel, who saw an adult male fall off the Gibb Gilchrist ferry in the vicinity of Seawolf Park.

The RB–M boat crew located the person in the water, pulled the individual aboard and transferred the man to awaiting emergency medical services personnel at Coast Guard Station Galveston. No injuries were reported.

"We encourage mariners to keep a sharp lookout for signs of danger and to call for help immediately at the first sign of distress," said Petty Officer 1st Class Chase Carey, operations unit controller, Sector Houston-Galveston. "Thanks to the vigilance and quick actions of the John W. Johnson ferry crew, our boat crew was able to swiftly and safely and pull the man from the water."

The Galveston-Port Bolivar ferry takes travelers on SH 87 between Galveston Island and the Bolivar Peninsula.