Ferry Runs Aground Off Ibiza. One 10-year-old Boy Seriously Injured 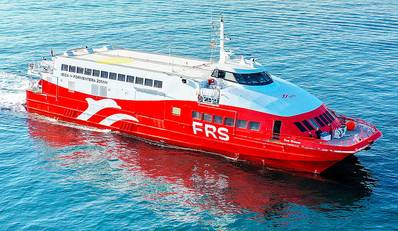 A ferry ran aground off the Spanish island of Ibiza on Saturday night, an incident the emergency services told local media had left 25 people injured, two seriously, including a 10-year-old boy.

It was leaving Ibiza's port at 9.30 p.m. on Saturday night when it ran aground on the islet of Es Malvins, FRS said in a statement.

It said the ferry was carrying 35 passengers and 12 staff at the time of the accident but did not comment on how many were injured.

Spain's coastguard launched a rescue operation and airlifted nine people in need of medical attention to hospital, it said in a statement. The rest were evacuated by boat.

The two seriously injured passengers, a 10-year-old boy and an adult, were airlifted to the San Espases hospital in Mallorca, emergency services told local media. Media reports said at least 25 people were injured

The San Gwann, a car ferry, takes 30 minutes to make the trip between Ibiza and Formentera. It has a capacity of 427 passengers.

In a message on its website on Sunday, FRS said the line was suspended because of the accident and that the "priority is the passengers and crew".

The regional president of the Balearic Islands, Francina Armengol, on Sunday said everyone had been evacuated and thanked emergency teams in a message on Twitter.