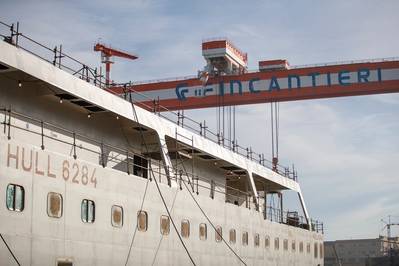 Italian shipbuilder Fincantieri said Thursday it has laid the keel for small ocean cruise ship Viking Mars, the eighth in a series for the shipowner Viking Cruises. The vessel is due for delivery in 2022.

As its sister ships, the newbuild will have a gross tonnage of about 47,800 tons, 465 cabins with accommodation for 930 passengers.

The Viking units are all built according to the latest navigation regulations and equipped with the most modern safety systems, including the “Safe return to port”. They also feature energy-efficient engines, optimized hydrodynamics and hull thereby reducing consumption, as well as systems which minimize pollution produced by exhaust gases, meeting the strictest environmental regulations, the builder said.

Fincantieri started its partnership with Viking in 2012, and today, the cooperation which first began with an order for two ships, has reached a total of 20 units, including the order awarded to Vard for two expedition cruise ships and the options. This is an all-time record, the largest number of units built by a shipbuilder for one sole shipowner.

The first of the series, Viking Star, was built at the shipyard in Marghera and delivered in 2015. The other units, Viking Sea, Viking Sky, Viking Sun, Viking Orion and Viking Jupiter, handed over between 2016 and 2019, were all built at the Ancona yard, as well as Viking Venus, which will join the shipowner’s fleet this year. Other nine units, including options, will take to the sea from the group’s Italian yards between 2022 and 2027.

Viking, which has been at a virtual standstill since March 2020 due to the COVID-19 pandemic, in December extended its operational pause through at least March 31, 2021.