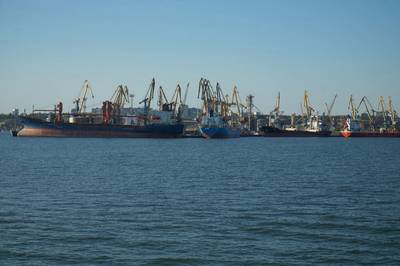 A first cargo ship has left the Russian-occupied Ukrainian port of Berdyansk, a local official said on Thursday, after Russia said the port had been de-mined and was ready to resume grain shipments.

"After a stoppage of several months the first cargo ship has left the Berdyansk port," Yevgeny Balitsky, a Russian-installed official in Russian-occupied areas of Ukraine's Zaporizhzhia region, wrote on the Telegram messaging service.

Russia's TASS and RIA news agencies cited Balitsky as saying the first cargo ship to leave Berdyansk was carrying 7,000 tonnes of grain to "friendly countries". But an edited Telegram post by Balitsky seen by Reuters did not say what cargo the ship was carrying.

Ukraine has accused Russia of stealing grain from the territories that Russian forces have seized since its invasion began in late February. The Kremlin has denied that Russia has stolen any Ukrainian grain.

The war threatens to cause severe food shortages as Russia and Ukraine account for around 30% of global wheat exports. read more

Balitsky said on Telegram the cargo ship was being protected by Russia's Black Sea fleet.