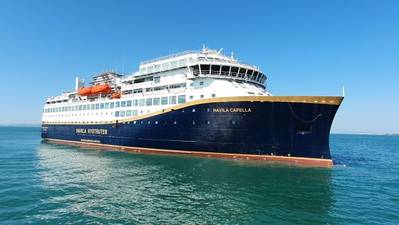 The 124-meter ship will soon begin sailing from Tersan Shipyard in Turkey toward the Norwegian coast ahead of its first sailings on the traditional coastal route from Bergen from December 1.

Havila Voyages CEO, Bent Martini, said, "We are many who have waited a long time for this, and now the first ship is finally in our hands and we will start preparing for setting sail towards Norway."

Mehmet Gazioğlu, general manager of Tersan, said, "The four coastal cruise ships for Havila Voyages are a special assignment for us. We have faced various challenges, including the corona pandemic, which has led to delays, but we have learned a lot from the first ship and expect more efficient construction of the next ones. And today we are looking forward to seeing the good result and the beautiful ship that Havila Capella has become."

Workers from the yard and subcontractors as well as Havila Voyages employees will be involved in parts of and the entire voyage to Bergen. When the ship arrives in Bergen, even more people will be on board to familiarize themselves and get ready for the first sailing.

"Havila Capella is a large hotel with 179 cabins, several restaurants and large common areas that will be made ready in a very short time in addition to crew and hotel employees to get to know the ship, systems and each other. But we have got off to a good start already, and we are confident that this will go well," Martini said.

He himself and several others from the administration will also establish a temporary office on board the ship when it arrives in Norway.

"We do this both because we need to have short distances, because we can be helpful and give an extra hand and of course also because this is something we want to be a part of. It is of course a special event to take part in, when starting up the first ship in the largest tourism investment we have seen along the coast."

Martini said he is looking forward to showing the ship to people along the coast and to the passengers who will travel with her: "We are really looking forward to get Havila Capella into service, and on the journey from Turkey to Norway we will post movies and photos on social media where you can meet ships and crew and get several sneak peeks on board."

Notably, the ship is powered by liquefied natural gas (LNG) and batteries.

"It gives zero emissions and no smoke that settles over Bergen city center. And that is just the beginning of Havila Voyages's history with environmentally friendly voyages along the coast where we with the world's largest battery pack on board can go without noise and emissions for up to four hours," Martini said.