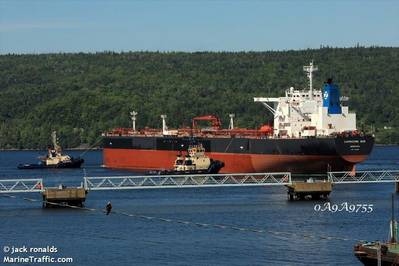 A tanker of U.S. sour crude was delivered at Germany's port of Rostock last week for the first time ever, according to sources, analysts and vessel tracking data, as local refiners test alternatives to Russian oil.

The European Union plans an almost-complete embargo of Russian barrels by year-end, and is trying to wean itself off Russian crude imports, which have fed inland refineries in Germany, Poland and other central European nations via pipeline.

Refiners plan to replace Russian oil with seaborne Norwegian, Saudi Arabian, British and U.S. crude grades. Russia has already shown through its natural gas exports that it is willing to cut off European destinations in a tit-for-tat over the EU's financial sanctions that followed Moscow's invasion of Ukraine in February.

"Although this is the first Mars crude oil shipment, there have been West Texas Sour shipments (to Germany) in the past, albeit few and far between," said Jim Mitchell, head of Americas oil analysts at Refinitiv.

"Mars has a higher distillate content than the WTI or the Eagle Ford grades. As the winter looms, Germany will increase its demand for distillate wherever they can get it from."

Distillates include refined products such as diesel, jet fuel and gasoil that is used for heating. Heavier, sour grades of oil tend to produce more distillate fuels than gasoline. Germany depends on Russia as a major source of diesel.

The Rostock oil terminal in the Baltic Sea is connected via pipeline to two refineries - the 233,000 barrel-per-day PCK Schwedt refinery and TotalEnergies' 240,000 barrels per day Leuna plant.

Both PCK and Leuna continue to receive Russia's main crude grade, medium sour Urals, through the Druzbha pipeline in compliance with EU sanctions on Moscow for its invasion of Ukraine.

Previously, German economy minister Robert Habeck said the country was working on solutions for Schwedt, including dipping into national oil reserves as well as getting shipments from the German port of Rostock and possibly Gdansk in Poland.

Schwedt supplies most of Berlin's fuel and Germany is struggling to wrest control of the plant, fearing retaliation by Moscow if the site is nationalized and as Western firms hesitate to step in.

The United States exported nearly 3 million barrels of oil a day in 2021, but Germany is a fairly minor buyer, only importing about 77,000 bpd, according to U.S. Energy Department figures.

U.S. producers of liquefied natural gas (LNG) boosted exports to Europe in September even as a plant outage kept overall…