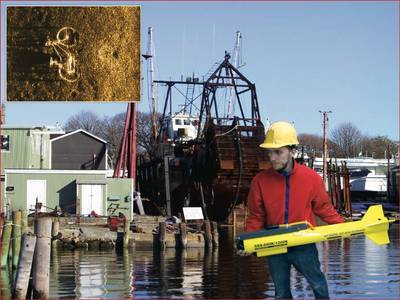 This new side scan sonar can show extremely detailed images of even small and soft targets such as old wood wrecks, areas of scattered debris, or even a drowning victim.

When the 1200 kHz was towed over a bicycle that had been disposed of in a waterway, not only were the bikes frame and wheels clearly visible, but also the seat and other features.

The new sonar is available as a single frequency system or a dual frequency side scan with two sets of transducers in one towfish. Putting two sets in one fish provides tremendous versatility allowing the operator to switch between frequencies at any time during operation. The lower frequency is capable of scanning long ranges, but with less resolution. High frequency has a shorter scan range, but produces highly detailed images.

In a typical search operation an initial scan is done with the low frequency. When a potential target is located, the operator switches to the high frequency and makes a closer pass yielding an exact identification of the object.  The two frequencies available for coupling with the 1200 kHz in a dual frequency system are the 600 kHz and the 100 kHz. The 600 kHz provides an excellent combination of range and resolution with a maximum scan of 200 feet per side (400 foot swath), yet with the capability of detecting small targets. The 100 kHz has the longest range, up to 2,000 feet per side (4,000 foot swath),  making it ideal for scanning large areas when searching for big targets  such as downed aircraft or sunken ships.

Fire and police departments consider side scan an essential piece of equipment for their dive teams. Sonar can save hours of dive time and dramatically increases the safety factor. Towing the sonar over an area produces a detailed map of the underwater terrain so divers know exactly what's down there before entering the water. Even in zero visibility environments the clarity of the image is the same.

Another option for Fishers' side scan systems are Sonar Map Coverage software which shows the track of the boat as it moves over the search area and the size of the area being scanning, ensuring no part of the area is missed. The map can be displayed in a small window laid directly over the side scan track, or displayed alone, and GPS position coordinates are automatically captured with the sonar data. During playback the sonar track can be overlaid onto a nautical chart showing the precise location of the search operation.

In the picture: Side scan sonar fish, with inset image of a bicycle on river bottom.