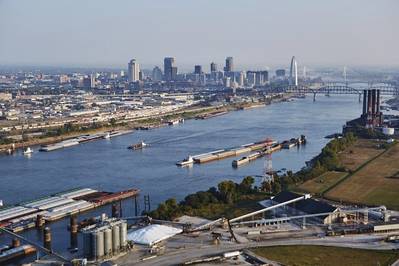 The Mississippi River as it winds around the St. Louis Arch on a better day. CREDIT: St. Louis Regional Freightway.

The U.S. Coast Guard said it closed the Mississippi River near St. Louis to boat and barge traffic on Friday as excessive rains and heavy snow melt this spring swelled the major shipping waterway to near record levels.

The river - a key transportation artery for shipments of grain, agricultural chemicals, energy products and other commodities - is closed from river mile marker 179 to 184, the Coast Guard said.

The river will reopen "as soon as conditions improve," he said, but would not speculate on when that would be.

The Mississippi River gauge at St. Louis rose to 38 feet on Friday morning and was expected to rise to 42.5 feet by Monday, about 7 feet below the record crest set in the summer of 1993, according to the latest National Weather Service (NWS) forecast.

Water levels are forecast to steadily recede over the next two weeks, but that outlook could change as more rain is expected across the Midwest next week. The NWS said its river level forecast considers current conditions and expected precipitation about 24 hours into the future.