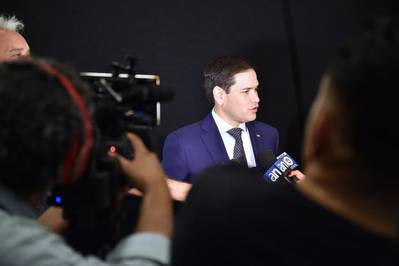 U.S. Senators Marco Rubio (R-FL) and Rick Scott (R-FL) introduced the American Shores Protection Act to codify the moratorium on oil and gas drilling off the coasts of Florida that was put in place by September 8, 2020, Executive Order by then-President Trump.

Under the legislation, the moratorium would be in place for the Eastern Gulf of Mexico and South Atlantic until 2032.

“From beautiful beaches that draw tourists from around the world to housing critical military infrastructure, Florida’s coastlines are vital to our state and national economies,” Rubio said.

“Protecting Florida’s unique coasts and vital military assets has long been a priority of mine. I am grateful for the steps taken by the Trump Administration to ensure the existing moratorium in the Eastern Gulf of Mexico remains in place beyond 2022, but we must do more. This legislation would solidify the protections that President Trump implemented, ensuring that both of Florida’s coasts will remain safe from executive action to revoke the moratorium.”

“As Governor of Florida, I fought for and secured a commitment from the Trump administration to ban oil drilling off Florida’s coasts,” Scott said. “While I’m glad the moratorium on drilling was extended for another 10 years under the Trump Administration, it’s time to codify this ban into law. I’m proud to join Senator Rubio in this important fight to preserve and protect Florida’s natural resources for generations to come.”

“Preserving Florida’s beaches will be critical to our state’s booming economic comeback and we must continue to focus on conservation efforts to ensure our shores remain clean,” Waltz said. “By making law the ban on offshore drilling, we can focus our state’s environmental efforts on water quality and reducing red tide that is killing our marine life and devastating our beaches. I’m grateful to work with Senator Rubio to put Florida’s coasts first.”