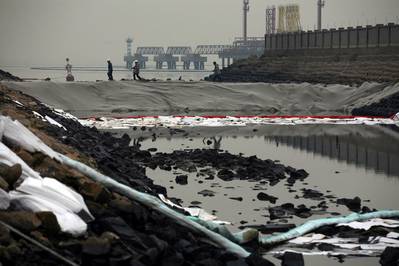 Workers clean up oil on a river of the Jiaozhou Bay after an oil pipeline exploded at the China Petroleum & Chemical Corp. plant in the city of Qingdao, east China's Shandong province, on November 23, 2013. (AFP/Getty Images)

Inchcape Shipping Services (ISS) is advising that oil tankers are remaining at anchorage having been evacuated from Qingdao Port, China. Currently only the oil terminals are affected, with the exception of Dagang terminal, located at east Jiaozhou Bay. Many tankers have received changed discharge instructions from domestic receivers.

Other bulk, general cargo and container terminals are operating normally. Sea contamination has extended to around three square kilometers and the oil from the explosion has leaked into Jiaozhou Bay. It is unknown at present when the oil terminal will reopen.

The explosion occurred near the southern gate of the Lidong Chemical Plant in the city’s Huangdao district following a leak in the pipeline operated by Sinopec, China’s largest oil refinery.