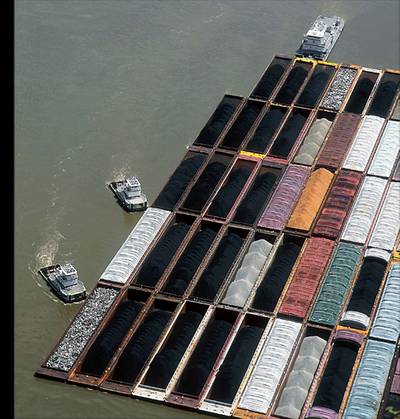 Freight volumes in the United States have fallen year on year for the first time since 2012 and before that the recession of 2009, according to the Bureau of Transportation Statistics.

The total volume of freight moved by road, rail, pipeline, inland waterways and as air cargo in November 2015 was 1.1 percent lower than in the corresponding month a year earlier.

Freight demand growth has been slowing since the start of last year but the slowdown intensified in the second half and November marked the first time that year-on-year growth turned negative.

Volumes have been hit by a combination of factors. Coal shipments to power producers have fallen as a result of cheaper natural gas and stricter environmental regulations.

Exports of manufactured products and basic commodities are down thanks to a stronger dollar which has made U.S. producers less competitive in global markets.

Farmers have delayed shipping some grains, especially corn and soy beans, in the hope that prices will recover in future.

Manufacturers, wholesalers and retailers have cut new orders as they struggle to reverse excess inventories built up as a result of over-ordering in 2014 and early 2015.

Freight shipments related to oil, gas and mining have tumbled as the plunge in commodity prices forces a widespread slowdown in drilling and quarrying.

Rail freight volumes were lower in 6 of 11 categories, including coal, farm products, forest products, metals, minerals, and petroleum and refined fuels, and the downturn deepened in the second half of 2015.

The freight recession is depressing the demand for diesel, the fuel most closely associated with oil and gas extraction, mining, manufacturing and commercial transportation.

Distillate demand growth peaked at the start of 2015 and slowed throughout the year before turning negative in the second half.