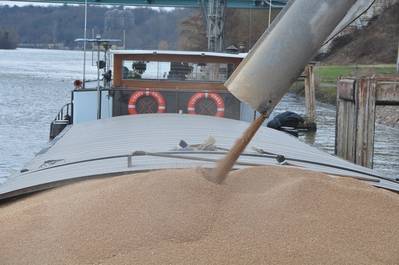 The second-largest French soft wheat harvest on record, smaller competition from Russia and an unusual run of French wheat sales to China have boosted exports so far in the 2019/20 season that began in July.

Shipments to non-EU countries were at a four-year high for the month, recording 1.22 million tonnes of wheat shipped, compared to 904,000 tonnes a year ago.

Algeria remained the top export destination for French wheat in December, importing 477,000 tonnes, down from last year's total of 563,000 tonnes.

More than 755,000 tonnes were loaded on 29 ships in the northern port of Rouen, where union members had organized several strike actions as part of a nationwide protest over pension reforms, the data showed.

Wheat exports outside the European Union total 5.13 million tonnes halfway through the current season, slightly under the 12.2 million tonnes for the full season projected by farm office FranceAgriMer last month.

Total grain shipments - including maize, barley, malting barley, waxy and durum wheat - were the highest on record for December at 1.70 million tonnes, according to Refinitiv data going back to 2009.

The last year comparable in total volume is 2013, when 1.69 million tonnes of grains were exported from French ports in December.

Grain exports to countries outside the EU were at four-year highs, totaling 1.49 million tonnes compared to the 1.51 million tonnes exported in 2015.

Operators were able to increase their total export volume by increasing the load per ship over the month, as 103 ships were contracted in both 2019 and 2018, the data showed.

The number of ships contracted to carry French grain has steadily declined over the decade, reaching a peak in 2010 when 142 ships carried 1.41 million tonnes.