Afloat on a Frigid Frontier 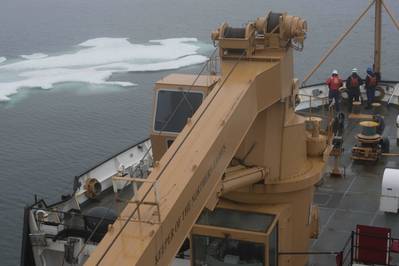 Located 100 miles northwest of Barrow, Alaska, the crew of the 225-foot buoy tender out of Sitka was on a mission to support marine mammal research conducted by Josh Jones, a graduate student researcher at the Scripps Institution of Oceanography (SIO) in San Diego.

The Coast Guard crew used their buoy-tending skills and equipment to recover the floating ball, which surfaced after spending a year 1,000 feet below. Suspended beneath the yellow buoy was a high-frequency acoustic recording package (HARP), a device developed by the Whale Acoustics Laboratory at SIO, used to record underwater sound in a broad range of frequencies, including the sounds made by Arctic marine mammals.
“This recovery marked the tenth consecutive year of acoustic monitoring at this location,” said Jones. “The HARP can record continuously for a year at a time. Each year, we return to the recording site to recover the instrument and data, replace the batteries and hard drives, then redeploy it back at the same location. To be able to return to this site for ten years running is a great accomplishment.”
Jones noted that scientists in the Arctic often depend on vessels of opportunity for access to the region, as well as for manpower and equipment to assist with the research.
“One of our primary missions during this transit is to provide scientific support,” said Lt. Cmdr. Patrick Armstrong, commanding officer of the Maple. “Maple is scheduled for a year-long dry dock in Baltimore this August for repairs and upgrades. It is exciting to transit the Northwest Passage with an opportunity to assist with research aimed at understanding various species in this remote part of the world. Protecting life here begins with understanding it.”
After a successful recovery and reset of the HARP, Maple’s crew assisted Jones with zooplankton sampling and measuring the properties of seawater at various depths and locations.
“Parts of the Arctic Ocean are among the most biologically productive on earth,” said Jones. “This is due to the massive growth of phytoplankton that occurs annually in and under the sea ice. The ultimate goal of acoustic recording and zooplankton sampling is to understand how Arctic marine mammals and the ecosystems they are part of respond to changing environmental conditions, especially changes in sea ice.”
The crew of the Maple departed Sitka July 12. They arrived in Nome July 19 and welcomed aboard seasoned ice navigator and retired Canadian Coast Guard Capt. Marc Rothwell. With more than 36 years of maritime experience, Rothwell first began navigating in Arctic waters as a cadet in 1982. Immediately after reporting, Rothwell began assessing daily ice charts to help determine the best route east. On July 24, the crew of the Maple, led by the crew of Canadian Coast Guard Ship Sir Wilfrid Laurier out of Victoria, British Columbia, encountered their first field of floating ice, in dense fog about 100 miles east of Barrow.
“With Captain Rothwell aboard and the crew of the Sir Wilfrid Laurier leading the way, we navigated our first ice field with confidence,” said Armstrong. “We thank Captain Rothwell and also the Canadian Coast Guard for their support on this patrol. I’m very proud of my crew thus far, but we have a long way to go.”
The crew of the Maple is scheduled to enter Canadian waters and proceed through the Northwest Passage with support from a Canadian icebreaker in the coming days. Maple’s crew will continue to assist Jones with his research whenever possible as they make their way east toward the Atlantic.