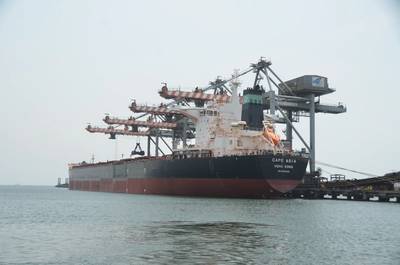 Gangavaram Port, the deepest and the most modern port in the country, has created yet another historical milestone record by discharging 1,56,339 metric tons of Non-Coking Coal from the vessel M.V. Cape Asia in 24 hours. This achievement stands out as the fastest discharge rate in the history of any port in India & possibly in the world.

Gangavaram Port, in the past, has achieved numerous such operational milestones and has today redefined the port operational standards for the bulk cargo handling at Indian Ports. With 9 berths with upto 19.5 m water depths, GPL has handled more than 112 MMT of Cargo till March 2016.