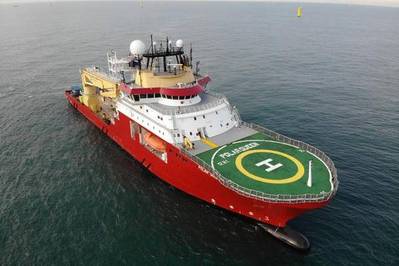 "The vessel has today been delivered to the new owner," GC Rieber Shipping said in a brief statement on Tuesday, without disclosing the name of the buyer. U.S.-based Schmidt Ocean Institute has said it acquired the vessel—now renamed Falkor (too)—for use as an oceanographic research ship.

The Polar Queen is an IMR / walk-to-work vessel, built at Freire Shipyard in 2011. The gangway that was on board the vessel was excluded from the sale and will remain an asset for GC Rieber Shipping's vessels.

GC Rieber said in February that the sale would results in "a positive liquidity effect of approximately NOK 22 million after repayment of the vessel`s outstanding debt," adding that the vessel would leave the offshore industry.

The vessel was most recently used on a short-term charter by an unnamed company in Europe for work at an offshore wind farm.

In the coming months, the ship will be refitted with science capabilities and sophisticated maritime technologies in Spanish shipyard. The refit is expected to be completed by early 2022.

"This new ship will build on Falkor's legacy, not only continuing but also expanding the remarkable discoveries and collaborative research made by Schmidt Ocean Institute and our science partners," Wendy Schmidt, who co-founded Schmidt Ocean Institute with her husband Eric, "With Falkor (too), we will be able to host more scientists, conduct more research and explore more of our Ocean as we seek to advance our understanding and protection of one of our planet’s most valuable natural resources."

“Falkor (too) will allow us to broaden our geographical range of operations and, with more than three times the interior capacity of Falkor and more than six times the deck space, this vessel will meet the research needs of scientists around the world for decades to come,” said Jyotika Virmani, Schmidt Ocean Institute executive director. “With 80% of the seafloor still unmapped, we will be installing a complete suite of modern mapping capabilities as part of the refit. We will also be adding state-of-the-art scientific laboratories, a high-tech on-board mission control room for our ROV SuBastian, and facilities for artists that will greatly enhance both the research capabilities as well as our outreach and artist-at-sea program next year.”