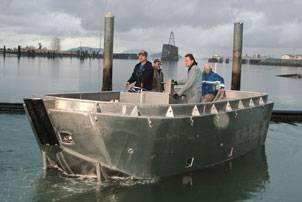 Tyler Boats of Sedro Woolley launched its second 22-ft by 11-ft Seine Skiff.  Powered by a John Deere 6081, 375 hp engine, this seine skiff is designed to pull.  Helped by a 32-inch nozzle steering these skiffs have a pull measurement over 9,500 lbs. This pulling power is harnessed within a stable designed platform for the operator.

The seine skiff is often described as the “weak link” in a purse seine operation.  Bad weather, pulling against the tide, or just holding the set on the beach the role the Seine Skiff plays can keep you in the game.

In today’s competitive seine fishery the number of sets per opening and quality of the set plays the biggest role on the fish delivery ticket.  In yester years days of nine and 10 sets was respectable.  In today’s seine fishery its 20 to 22 sets per day pays the bills.  Helped by large body Purse Seiners (58-ft by 26-ft), power blocks that can make the net rain back on the deck, and spectra Seines the new generation of purse seiners will exceed the average catch by a long shot.