Getting Serious About Titanic ll 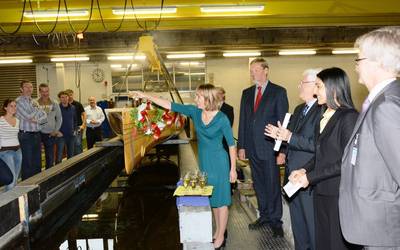 A 9.3m wooden model of Titanic II was put through propulsion and power testing in a 300m long tank at HSVA’s Hamburg facilities over four days from September 9-12.

HSVA Director of Resistance and Propulsion, Dr Uwe Hollenbach, said HSVA was delighted to be part of the historic Titanic II project., continuing: “Titanic II is a prototype as present day passenger vessels have a completely different type of main hull parameters and therefore are unsuitable as references,”

“The speed and power performance model testing is one of the critical aspects for a prototype vessel and needs to be verified before a construction contract is completed. Self propulsion tests determine the optimal sense of wing propeller rotation, the neutral wing thruster angle and optimal load distribution between wing and centre units.”

In honour of Titanic II and Blue Star Line, a naming ceremony and launching of the model on a traditional slipway was held.