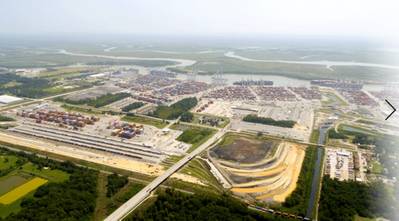 GPA executive director Griff Lynch commented: “The market has clearly chosen the Port of Savannah as the south-eastern hub for containerized trade. To fulfill the growing responsibility placed on our deepwater terminals, we have developed a plan to double our capacity.”

GPA board chairman Will McKnight said: “What has set Savannah above the competition is our ability to scale up in advance of market needs so that we are ready when our customers are ready to grow. Our terminal infrastructure plan adheres to our investment philosophy of always keeping infrastructure ahead of current demand. This will ensure the GPA is prepared to handle the next wave of cargo expansion.”

A dual-rail service from the Port of Savannah to Chicago was recently launched to manage the increasing container trade crossing Garden City Terminal and the GPA is also considering a $220 million expansion of its on-terminal rail infrastructure at the Port of Savannah.