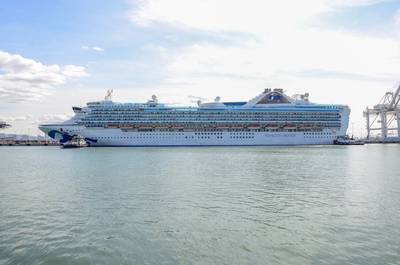 Weary passengers aboard a cruise ship idled at sea for days by a coronavirus outbreak erupted in cheers on Monday as the vessel sailed into San Francisco Bay en route to the Port of Oakland and the next, unexpected phase of their voyage - two weeks of quarantine.

The 2,400 passengers, who have been largely confined to their staterooms since Thursday, were to begin disembarking on Monday for transport to quarantine stations or hospitals, depending on whether they are well or need immediate medical attention.

Except for those with acute illness, the 1,100 crew members are to remain aboard the Grand Princess, which will depart the Port of Oakland as soon as possible to be quarantined for two weeks in an as-yet undisclosed location outside San Francisco Bay, officials said.

Video footage shot by one of the arriving cruise guests and shared with Reuters showed jubilant passengers cheering from their stateroom balconies and open windows, some shouting, “We’re home!” as the vessel passed beneath the Golden Gate Bridge into the bay.

Twenty-one people aboard the ship, mostly crew, tested positive on Friday for coronavirus, which causes the respiratory disease known as COVID-19, in an initial round of diagnostic screenings performed on about 45 people with symptoms.

The remaining passengers are to be tested and monitored for signs and symptoms of the illness that can lead to pneumonia once they reach their designated quarantine sites.

Denise Stoneham, 52, a Bay area resident on the cruise with her husband, seemed to take the ordeal in stride as she spoke to Reuters by Facetime while the ship glided into the port.

“It hasn’t been too much of a hardship for us; it’s just been more of an inconvenience, I guess,” she said. “We’re just anxious to get home.”

Princess Cruises, owner-operator of the ship, announced that passengers would receive a full refund for the price of the cruise, including air travel, hotel, ground transportation and pre-paid shore excursions.

The company also offered patrons credit for a future cruise equal to the fare paid for the voyage.

But at least one couple aboard the Grand Princess were seeking more than a refund.

In what was believed to be the first civil case stemming from the cruise outbreak, Ronald and Eva Weissberger of Broward County, Florida, sued the cruise line for more than $1 million, saying they were traumatized by the fear of developing coronavirus.

Parent company Carnival Corp, the world’s leading cruise operator, did not immediately respond to a request for comment.

Links to previous cruise
The Grand Princess was first denied entry to San Francisco Bay on Wednesday as it sailed back from Hawaii after state and local health authorities learned that some passengers and crew had developed flu-like symptoms, and that guests from an earlier cruise to Mexico aboard the same ship later tested positive for coronavirus.

Health authorities have said at least two, including a California man who died, probably contracted the virus aboard the vessel. Since then, a total of 12 coronavirus cases have been linked to the previous Mexico trip.

California Governor Gavin Newsom had insisted the current cruise be halted and the ship kept at sea until individuals aboard who were sick could be tested, and diagnostic kits were flown to the ocean liner by helicopter on Thursday.

But it took federal, state and local authorities until Sunday to decide on a return-to-port strategy and quarantine plan for the ship, and to work out logistics of keeping the ship and everyone board isolated from the general public.

The U.S. Coast Guard flew medical teams to the vessel on Sunday to assess the health of passengers and crew ahead of their arrival.

Under plans announced on Sunday, California residents were to go to two existing quarantine sites near Sacramento and San Diego. Out-of-state residents will be transported to two quarantine stations in Texas and Georgia.

Newsom said on Sunday the government was arranging to repatriate foreign cruise passengers by charter flights to their home countries. He said they would be ferried on special buses to a non-commercial terminal at Oakland International Airport.

The Port of Oakland, located across San Francisco Bay from the vessel’s home berth, was chosen because it was one of the few in the region able to accommodate a large cruise liner and was deemed relatively easy to seal off while passengers are unloaded and moved elsewhere, Newsom said.

Princess Cruises also owns the Diamond Princess, which was quarantined off Japan in February and was for a time the largest cluster of coronavirus cases outside of China, where the outbreak originated. About 700 people aboard that ship became infected, and six have died.