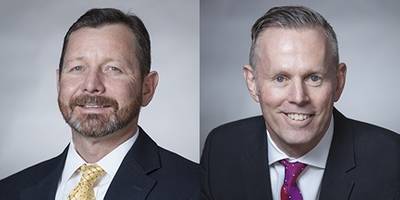 Johanson and Gunsten will assume their new roles effective August 1, 2022. Their positions will fill the roles currently held by the Company’s Chief Operating Officer, David E. Simonelli, who is retiring on September 16, 2022. Simonelli will oversee the transition and continue to serve the Company as a consultant following his retirement.

Prior to his appointment, Johanson was the Senior Vice President, Gulf Region, for the company. He has previously served as Vice President and Hydraulic Division Manager, and served as Vice President, Project Director of Charleston Deepening Projects, which included the largest dredging contract ever awarded by the U.S. Army Corps of Engineers. He joined the company in 1994 as a field engineer and has held positions of increasing responsibility in project management. He earned a Bachelor of Science in Ocean Engineering from Virginia Polytechnic Institute & State University and an MBA – finance specialization from the University of South Carolina. He is a current board member of the Western Dredging Association Eastern Branch and is a member of American Society of Civil Engineers.

Gunsten has been the company’s Senior Vice President, Project Services, since October 2021. Previously he served as Vice President, International Operations, with responsibility for acquiring projects, providing estimation data, and leading field supervision of work in progress. He began his career with the company as a Field Engineer in 1992. Prior to joining the company, Gunsten served as the company’s Deputy Project Manager for Chevron’s Wheatstone LNG Project’s Engineering, Procurement and Construction dredging subcontract in Onslow, W.A., Australia, valued at $1.2 billion AUD, as Project Manager executing a series of capital projects for the USACE New York District’s 45- and 50-Foot Harbor Deepening Programs, and as Operations Manager for GLDD’s Øresund Fixed Link Project in Copenhagen, Denmark. He received his Bachelor of Science in Civil Engineering from Rutgers University.