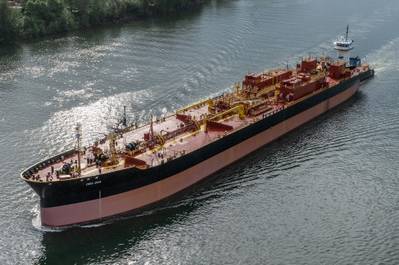 The OSG 204, paired with the tug OSG Endurance, underway on the Willamette River following her delivery on May 29 (Photo: Greenbrier)

Greenbrier Marine announced Tuesday it has delivered OSG 204, the first of two new 581-foot, 204,000-barrel-capacity oil and chemical tank barges for Overseas Shipholding Group, Inc. (OSG). The second barge is schedule to be delivered during the fourth quarter of 2020.

The new barge OSG 204 will be operated for dual-mode integrated tug-barge (ITB) service pursuant to U.S. Coast Guard NVIC 2-81, Change 1. The unit is paired with an existing tug within the OSG fleet, the OSG Endurance, and will travel to the Gulf of Mexico to service the Jones Act trade. The articulated tug-barge (ATB) unit has been fixed to a long-term charter commitment, with delivery to the charterer occurring late in the second quarter of 2020.

Among the largest ever constructed by Greenbrier Marine, the new barge has been built in compliance with MARPOL Annex VI Regulation 13 Tier III standards regarding nitrogen oxide emissions within emission control areas, the builder said.

"The launching of OSG 204 was completed in December and the christening was celebrated on May 19 at the first virtual barge christening in the history of Greenbrier Marine, an adaptation necessitated by COVID-19," said Richard Hunt, General Manager of Greenbrier Gunderson in Portland, Ore.

"Completing a complex engineering and construction project on time and on budget is a challenge under any circumstances," said Sam Norton, OSG's President and CEO. "Having done so under the constraints imposed by COVID-19 makes that achievement all the more laudable.

"Together with her paired tug, Endurance, this ATB will perform one spot voyage to reposition the unit to the Gulf of Mexico, after which she will give delivery into a previously contracted one year time charter with a long-standing OSG customer. The additional earnings and cash flow that will be contributed by this new asset will allow OSG to build on momentum demonstrated in its recent financial performance." 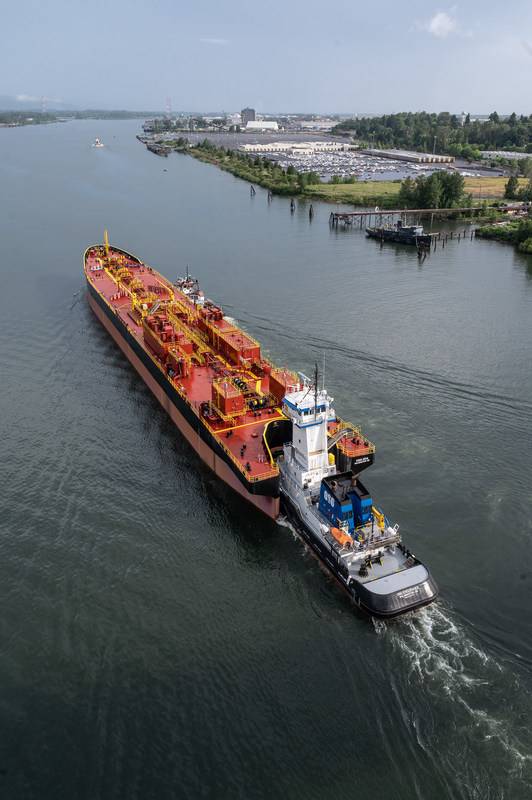 The ATB unit will service the Jones Act trade in the Gulf of Mexico (Photo: Greenbrier)