Guyana Races Against the Clock to Bank Its Offshore Oil Bonanza 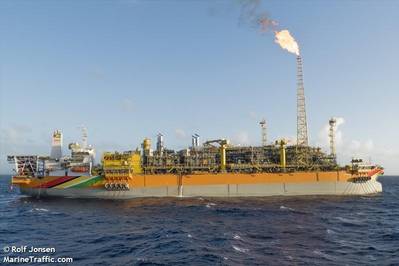 For the poor, small South American country of Guyana, there's no time like the present when it comes to reaping the rewards of its offshore oil jackpot.

With sky-high oil prices, a transition to renewable energy on the horizon, and 750,000 citizens desperate for better lives, Guyana is putting its foot on the gas to exploit its vast oil reserves, even if that means sacrificing some longer-term gains.

Already locked into contracts with oil firms that have been criticized for being too one-sided, Guyana had hopes of setting up a state-run oil company to manage the next development phase and conduct its own seismic surveys of unexplored fields - all with the aim of securing the best possible return.

But those plans have been shelved as the government faces up to the reality that Guyana doesn't have the skills or resources to pull them off quickly, and is banking on speed over certainty instead, senior officials told Reuters.

"We don't have the money or the capability," said Vice-President Bharrat Jagdeo, speaking for the first time about the decision to drop the state oil firm plans. "A model in which the government puts in money and operates the asset is off the table."

In a series of conversations with Reuters, Jagdeo also said the recent move to ditch the idea of Guyana doing its own surveys of unexplored blocks to attract higher bids from oil companies was driven by time and capacity too.

"We want to accelerate exploration so we can develop the economy as fast as possible," said Jagdeo, who has previously served as president and is arguably the country's most influential politician. "We will probably get less, but we might be able to get faster development."

Since its first discovery back in 2015, a consortium led by U.S. oil major Exxon Mobil XOM.N, along with partners Hess Corp and China's , has found more than 11 billion barrels of oil and gas in a vast block covering 6.6 million acres, about 120 miles (190 km) off the coast.

Based on current expansion plans, the group expects to pump 1.2 million barrels of oil per day from its holdings in 2027, putting Guyana ahead of neighboring Venezuela in terms of output, as well as every oil producer in Africa, bar Nigeria.

It would also give Guyana the highest oil output per capita in the world, ahead of wealthy Gulf states such as Kuwait, Qatar, and Saudi Arabia.

While Exxon pumped its first oil from Guyana in 2019 and is ramping up output, the government that came to power nearly two years ago with a wafer thin majority in parliament is under pressure to accelerate economic development.

Production sharing agreements signed by the previous administration in 2016 split the profits from the oil 50/50 between the Exxon group and Guyana, but 75% of the revenue goes first to cover the oil companies' costs.

That leaves Guyana with just 12.5% of the production plus a 2% royalty payment. Its take will increase as and when the development costs tail off - which could be several years away.

The split is not that different from deals in African countries, for example, which had no prior oil industry or oil legislation, according to Theodore Kahn, a senior analyst at security consultancy Control Risks.

But that's no solace to residents of the capital Georgetown, still waiting for the oil to improve their lives.

"The deal is unfair from the start," said Michael James, a fruit vendor in Georgetown.

His nephew, a cab driver, earns a living ferrying oil executives to meetings, he said, but the rest of his family struggles from a lack of affordable housing, healthcare or education.

"The oil companies are making all this money, the government is getting paid, but I don't see much difference in my life," said James.

This year will be the first time the government uses oil proceeds to fund new schools, roads and a power plant. But it will operate at a deficit of about $470 million in 2022 - a decision the International Monetary Fund has warned against.

"We want to avoid the oil curse and build a resilient economy that brings prosperity to all," Guyana President Mohamed Irfaan Ali told Reuters in a separate interview. "But as any developing country, we have many challenges."

That's why Guyana is keen to kick-start exploration and production in untapped offshore blocks outside Exxon's domain - potentially with better terms. The shift to renewables and the drive to slash fossil-fuel emissions is also focusing minds.

"It is important in the context of net zero to have reserves explored, discovered, proven and developed as quickly as possible," Vice-President Jagdeo said.

However, Guyana has never held an auction of drilling rights and lacks the skills to put one together without an outside firm to run the process, he said.

The current aim is to start offering new blocks in September this year. Setting up a state-oil firm, or carrying out surveys, would have pushed back the timeline, officials said.

An alternative to an auction that is still being considered would be to choose an outside partner to fund and operate a company in which the Guyanese government has a stake, Jagdeo said.

Exxon's more than 30 exploration successes to date have attracted several offers from other companies to invest in the unexplored areas, he said, declining to list examples.

"We licensed the blocks under a first come, first serve basis. Now, it is a totally different situation," he said.

Earlier this year, Jagdeo told Reuters that Guyana was in talks with Middle Eastern companies about a potential partnership.

A delegation of about 40 representatives from Saudi Arabia was in Georgetown last week for an investment conference and the Gulf kingdom's state-run oil giant Saudi Aramco was awarded a one-year contract in September to market Guyana's oil.

Signs of Guyana's newfound wealth are springing up in the seaside capital. A new 12-story hotel built by local group Pegasus is due to open soon - and it's now the tallest building in a former British colony that has long depended on agricultural crops such as sugar, rice, and coconuts.

More hotels will follow, though the capital is still plagued by power blackouts, and telecommunications are patchy.

Officials have agreed for Exxon to build a 227 km (141 mile) pipeline to bring natural gas ashore to fuel a new power plant for the capital. Exxon will be able to deduct the cost of the project from the oil revenue.

Jagdeo, who has criticized previous leaders for being unprepared for negotiations with the Exxon team, defended the decision saying the U.S. company was best suited to deliver the pipeline in the time needed.

The new $100 million power plant will slash the cost of electricity and provide a more reliable supply in a country that has long been wholly reliant on imported fuel, though the date it is due to come online has been pushed back a year to 2025.

Offshore, Exxon and its partners have grand plans. More than 300 workers are aboard the first two of what could be as many as 10 floating production vessels. Taller than the new hotel in Georgetown, the vessels cost about $2 billion each and come with living quarters, gyms, dining and entertainment areas.

Guyana's non-oil economy will grow a healthy 7.7% this year, business consultants Ernst & Young Services estimate, though that's far behind the 47.5% growth it expects for Guyana's gross domestic product including oil.

Hess estimates that production from the four vessels will break even with oil priced at $25 to $35 per barrel. Brent crude spiked to $139 a barrel shortly after Russia's invasion of Ukraine and is currently hovering around $100. LCOc1

Combined, the four vessels should produce about 800,000 bpd by 2025 - more than the annual output of Venezuela, which has the world's largest oil reserves. The group aims to have six vessels delivering 1.2 million bpd in 2027.

Alistair Routledge, Exxon's most senior executive in Guyana, has said seven of up to 10 oil platforms are now confirmed. That could nearly double the $30 billion budget Exxon, Hess and CNOOC have agreed for the first four vessels and other infrastructure.

John Hess, chief executive of Hess, said last month he thinks there are many more billion barrels of oil off Guyana - on top of the 11 billion discovered so far.

"We're in the early innings of this," he said.