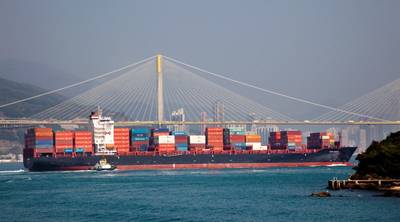 Hamburger Lloyd will remain responsible for the technical management and crewing of the two freighters. With the purchase of the Constantia and the Calliditas, Hapag-Lloyd AG is expanding its fleet to a total of 17 units in the 4000-6000 TEU ship segment. The RHL Calliditas has already been deployed as a charter vessel for Hapag-Lloyd in the Swahili Express / Gulf India Africa service since 2019. Now the RHL Constantia will join the liner services of the world's fifth-largest liner shipping company.

Both vessels were built on behalf of RHL in 2013 as part of a four-ship series. They were built at the Chinese shipyard CSSC Shanghai Jiangnan Changxing Heavy Industry Co, Ltd. With a length of 259.9m, a breadth of 37.3m and a draught of 12.5m, they each have a deadweight capacity of 57,500 tons. The cargo capacity totals 4620 TEU nominally or 3625 TEU with a homogeneous loading of 14ts / TEU. 1856 TEU can be stowed in the holds and 2764 TEU in up to seven tiers on deck.