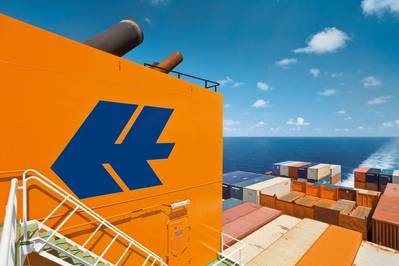 German container shipping line Hapag-Lloyd nearly doubled net profit in the first half of 2020 and kept its full-year outlook intact but warned that the coronavirus crisis bears indiscernible risks for its operations.

"We have not put the pandemic behind us. Compared to a normal situation, customers' booking behaviour is volatile," Chief Executive Rolf Habben Jansen told Reuters.

Transport volumes at Hapag-Lloyd, the world's number five in the industry, were down 3.5% year-on-year at 5.8 million 20-foot equivalent units (TEU).

Habben Jansen said those volumes were recovering but were unlikely to reach their 2019 level this year as economies worldwide have contracted amid lockdowns.

He said fuel costs remained at that low level. They rose by 4% on the year in the first half due to new environmental fuel regulations that kicked in worldwide on Jan. 1.

The company adjusted capacity due to lower demand and took additional cost-cutting measures as part of its performance safeguarding program, he said.

First-half EBIT was at 511 million euros, surpassing 389 million a year earlier while EBITDA came in at 1.17 billion euros, up from 956 million euros in the comparable 2019 period.

Analysts think container shipping could benefit from the resumption of more Chinese business activities and a tentative recovery.

(Reporting by Vera Eckert in Frankfurt and Jan Schwartz; Editing by Michelle Martin)