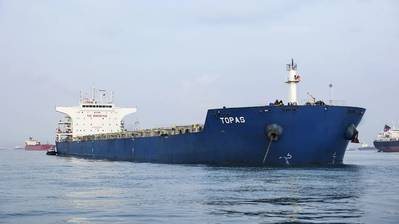 Just several months after the launch of Harren Bulkers, three 93,000 tdw Post-Panamax bulkers have been secured for the company's fleet on a long-term basis.

The newly formed Bremen-based shipping company on Wednesday announced the acquisition of the 2011-built Post-Panamax bulker Topas. The ship will be named Pablo, and with an overall length of 229.2 meters (38-meter beam, 14.9-meter draft) it is currently the largest ship in the Harren Bulkers fleet. The two 2012-built sister ships Turmalin and Tuerkis were taken over by Oldendorff Carriers and renamed Constantin Oldendorff and Clemens Oldendorff just after delivery. Oldendorff entrusted Harren Bulkers with the technical management of the vessels.

Dr. Martin Harren, managing director of Harren Bulkers and the Harren & Partner Group, said, “Our bulker division is becoming an increasingly important and larger part of our group. As such, it only makes sense that we would continue to grow our fleet strategically in the long term. The three Post-Panamax vessels are just the first step – one that will lay the foundation for acquiring more ships and expanding our fleet. Once again, our bank, the Ostfriesische Volksbank, proved to be a reliable partner to implement this project.”

Joachim Zeppenfeld, managing director of Harren Bulkers, emphasises the quality of the ships: “The three bulkers were built by COSCO Zhoushan Shipyards in China. There is currently sufficient demand for this size of tonnage. We have used these types of vessels for many years, and they have always performed extremely well.”

Patrik Pukall, head of project finance at Harren & Partner and general manager at Harren Bulkers, added, “We have seen a strong response from potential partners since Harren Bulkers was founded. We would like to use this momentum, coupled with the positive developing market environment, to implement further projects.”