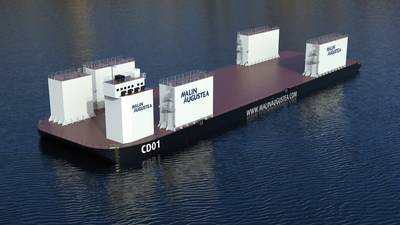 A giant semi-submersible lifting barge is being lengthened and strengthened at the Hat-San shipyard in Turkey in preparation for a new working life with marine services and transportation firms Malin Abram and Malin Augustea in Scotland.

Once converted, the massive barge will be one of the largest in Europe, and the only one in Scotland able to submerge and load vessels and cargo up to 12 meters deep and 140 meters long, the Malin Group said. With a submergence depth of up to 12 meters over deck and a deck space of 4,200m, the barge can accommodate the load out and float off of most offshore structures and vessels.

Sandro Lipani, director at Augustea, said the barge “ will offer an asset to support shipbuilding, civil construction and renewable energy projects for years to come.”

On arrival in Scotland, the barge will be used by heavy lift specialists Malin Abram and Malin Augustea to transport and launch the Type 26 Global Combat Ships being built by BAE Systems for the British Royal Navy, then berthed on the Clyde and made available to industry as required, catalyzing further opportunities for the wider supply chain in fields including shipbuilding, civil construction and renewable energy.

John MacSween, managing director of the Malin Group, said, “Securing this piece of equipment marks another positive step forward in the reawakening of the shipping and large-scale marine manufacturing industry in Scotland. This versatile asset can be used for launching and bringing ships ashore, docking vessels locally or at remote locations as well as being used to relocate large structures around the U.K. and further afield.”