Hezbollah: 'No one' will Extract Gas From Maritime Zones if Lebanon Unable To do So 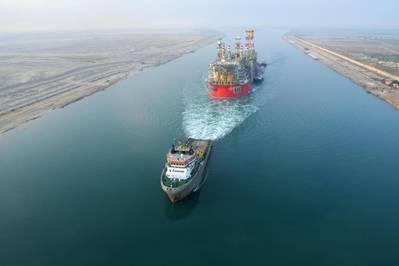 The head of powerful armed group Hezbollah warned on Wednesday that "no one" would be allowed to operate in maritime oil and gas fields if Lebanon was barred from its "rights" in extracting from areas off of its own coast.

"If you don't give us the rights that our state is asking for ... then we could flip the table on everyone," Sayyed Hassan Nasrallah said in a televised address.

"If you want to get to a formula where this country is barred from taking advantage (of these fields), then no one will be allowed to extract gas or oil and no one will be able to sell gas or oil," Nasrallah said.

Lebanon is locked in U.S.-mediated negotiations with Israel to delineate a shared maritime border that would help determine which oil and gas resources belong to which country.

Israel has already begun work at the Karish gas field through a vessel operated by London-based Energean.

On July 2, Hezbollah launched three unarmed drones toward the vessel, which Israel intercepted.

Nasrallah said it was the "first time" such an attack had taken place and that it was meant to alert workers aboard the vessel that it "is not a safe area."

He hinted at further attacks, saying his group has military capacities on land, in the air and at sea, and could deploy a "large number" of weaponised drones simultaneously.

Nasrallah threatened "Karish and beyond Karish," echoing a statement he made a few weeks before a month-long conflict with Israel in 2006 when he threatened "Haifa and beyond Haifa."

The group subsequently launched rocket attacks on Haifa. Wednesday marked the 16-year anniversary of the start of the 2006 conflict.

Nasrallah also insisted that Lebanon had a "golden opportunity" in the next two months to secure its maritime rights before Israel completed work at Karish.

He urged Lebanese officials use his group as leverage, saying Hezbollah was Lebanon's "only strong point."

"The resistance is telling you, make use of me. Take advantage of me... Tell the Americans that these guys don’t answer to anyone, they’re uncontrollable – say whatever you want. Say it," Nasrallah said.