This Day In US Navy History - January 7 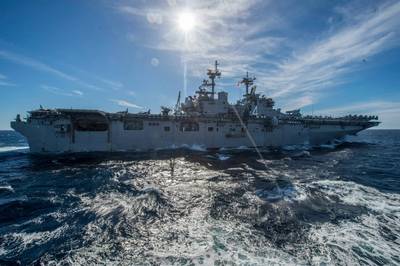 1822 - The schooner Porpoise captures six pirate vessels off Cuba and destroys their base, while USS Spark recaptures a Dutch sloop that had been taken as a prize by pirates. A landing party destroys the pirate's base in the West Indies.
1881 - Nathan Goff Jr., took office as the 28th Secretary of the Navy, serving until March. A World War II destroyer was named for him.
1945 - Destroyers Charles Ausburne (DD 570), Braine (DD 630), Russell (DD 414) and Shaw (DD 373) sink the Japanese destroyer Hinoki, 50 miles west-southwest of Manila Bay.
1945 - Submarine Spot (SS 413) sinks the Japanese gunboat No.2 Nichiei Maru in the Inland Sea.
1995 - Dock Landing Ship USS Harpers Ferry (LSD 49) is commissioned.
(Source: Naval History and Heritage Command, Communication and Outreach Division)