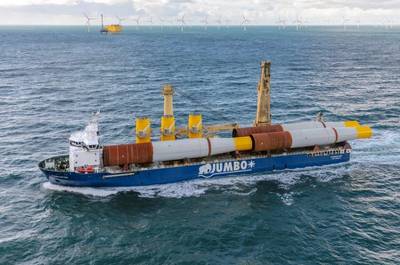 Supporting DEME Offshore, Jumbo deployed its K-3000 class heavy lift vessel Fairmaster to carry out its scope of transporting 141 monopiles and 131 transition pieces from Rostock, Germany, and Aalborg, Denmark to Eemshaven, the Netherlands.

“This engineered flexible solution made it an extremely efficient vessel for the project and is one of the things we’re most proud of – it helped us conclude the project scope within just 37 voyages in a period of just under twelve months,” says Jumbo’s project manager Maarten De Gruyter.

For Jumbo, the Hornsea Two was a project with the largest number of monopiles and transition pieces that it has ever shipped in a single contract – and also with a single heavy lift vessel.

"We converted the Fairmaster into a kind of ‘Swiss Army knife’ that provided an unrivaled heavy lift vessel intake of large diameter monopiles and transition pieces, but still with the flexibility required for the various lengths and diameters that were to be transported,” says Jumbo’s commercial manager Boudewijn van der Garden. “From tender to project conclusion, Jumbo’s focus was to provide a total solution. Our office personnel, engineering teams, and vessel crews are now ready for the next challenge.”

As part of reducing the environmental footprint of the construction of the Hornsea Two offshore wind farm, Jumbo was required to include a Green Initiative into its project execution.

Jumbo’s chosen solution was to sail with Bio-Fuel Oil from sustainable marine biofuel provider GoodFuels. This product is expected to deliver 80-90% CO2 reduction versus fossil equivalents and contains no sulfur oxide (SOx) emissions.

The 1.3GW+ Hornsea Two wind farm will be the Ørsted's 13th offshore wind farm in the UK and once it’s operational in 2022, Ørsted will be supplying over 7% of Britain’s electricity.

The wind farm will feature 165 8MW wind turbines supplied by Siemens Gamesa Renewable Energy. The turbines have a rotor 167 meters in diameter, with the blades 81.5 meters long.

The Hornsea Two project is where Ørsted earlier this year installed its 1000th offshore wind turbine in UK waters. This was the 16th turbine for the project itself.

Ørsted said last month that the project was ready for the final third of wind turbines to be installed. Once commissioned in early 2022, Hornsea Two will provide electricity for about 1.3 million British homes.