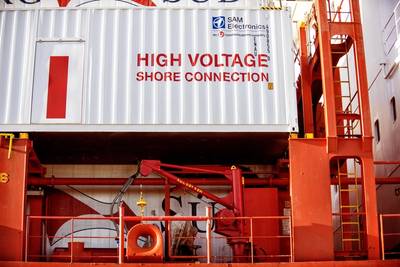 The initial test of ‘plugging in’ a vessel is critical to assessing the performance of this new and very high voltage shore power system. It is also vital to ensuring all trained units including ILWU and ship operators become comfortable with operating the gear. The process tests the vessel’s ability to synchronize with and connect to the Port’s grid-based system. Hamburg Sud, Chiquita, Ports America, Southern California Edison, project engineers, system developers, contractors, and port technical personnel geared up to make certain all protocols were in place and the inaugural plug-in ran safely and functioned properly.

This test was a success and a second major milestone for the Port’s Shore Power system. The first milestone was the Port’s successful load bank test in December 2013 that demonstrated the system’s capability to provide a reliable, steady source of shore power for ships at berth. The ceremony was part of the Port’s Earth Week celebration.

“Green is no cliché for the Port of Hueneme. We take action and make environmental sustainability a top priority in our business plan to ensure we improve the quality of life and bring prosperity to the communities we serve. This project represents perhaps the single largest reduction in air emissions by one project in the history of the county,” said Port Commission President Mary Anne Rooney.

"Port Hueneme is a critical economic engine for Ventura County, and I am so pleased to have worked with Port Director Kristin Decas in support of the Diesel Emissions Reduction Act grant. Not only will it help improve air quality but it will allow the port to better compete for business in the international market," said Congresswoman Julia Brownley (D-Westlake Village) who spoke at the ribbon cutting ceremony.

With the passage of AB 32 by the state assembly, programs were put in place mandating that refrigerated cargo vessels, called “reefer vessels” reduce greenhouse gas emissions of their ships at berth while in California ports. By connecting to the Port’s Grid-Based Shore Power System, the reefer vessels calling the Port will run their auxiliary marine engines on shore power in lieu of diesel fuel and dramatically reduce greenhouse gas emissions.

Speaking on behalf of Hamburg Süd, senior vice president Mike Wilson expressed the pleasure and pride the line felt at being able to deliver such a benefit both to the people of Hueneme and the wider California community. “It’s a major investment by both parties, with returns that will continue visit after visit,” he said. “Hamburg Süd has mounted a major effort to minimize our environmental impact, with fuel efficiency and energy saving measures that are achieving significant emission reductions,” Mr Wilson continued. “Hueneme’s on-shore power connection facility is a big step forward in this regard and we applaud the initiative.”

The Port of Hueneme’s project “represents a giant leap forward for the Port and the community” said Port CEO and Director Kristin Decas. “Over the lifetime of this project (30 years), annual emissions from refrigerated cargo vessels also known as “reefer vessels” will be significantly reduced”. Anticipated reductions include a 92% reduction in PM, 98% reduction in NOx, and a 55% reduction in greenhouse gasses.

Board Vice President Jess Herrera said, “The success of the project is tied directly to the critical partners that brought significant funds to help build this shore power system. Together we are creating jobs and building a cleaner environment for the citizens of the community and region. We extend our sincere gratitude for their support.”

The major financial contributors to make this project happen include the California Air Resources Board with proposition 1b funding, the Ventura County Air Quality Control District providing grants for engineering and Wells Fargo and Commercial Clearing House with a cash infusion from the Port’s New Market Tax Credit transaction as well as Southern California Edison. The next phase of the project is being funded in part by the Ventura County Transportation Commission.

The Port of Hueneme is one of the most productive and efficient commercial trade gateways for niche cargo on the West Coast. The Port is governed by five locally elected Port Commissioners. The Port moves $8 billion in goods each year and consistently ranks among the top ten U.S. ports for automobiles and fresh produce. Port operations support the community by bringing $1.1 billion in economic activity and creating 10,226 trade-related jobs. Trade through the Port of Hueneme generates more than $69 million in annual state and local taxes which funds vital community services.