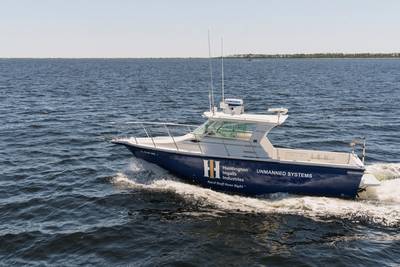 Proteus, outfitted with Sea Machines Robotics’ SM300 autonomy system, completed a successful demonstration off the coast of Panama City, Fla., on May 14.

“We are thrilled to launch our Proteus USV. The vessel performed exactly as expected with the SM300 system’s proven and safe autonomous capability,” said Duane Fotheringham, president of the Unmanned Systems business group in HII’s Technical Solutions division. “This marks a significant milestone in our commitment to advancing our unmanned systems capabilities and our continued partnership with Sea Machines to further develop USV solutions for our customers.”

For the demonstration, HII’s Proteus USV was equipped with commercial perception sensors, including GPS, automatic identification system, depth transducer, radar and a camera enabling a 360-degree field of view. HII deployed a separate 51-ft.dive boat during the demonstration to illustrate SM300 system’s off-the-shelf solution, including its obstacle avoidance capability and adherence to the International Regulations for Preventing Collisions at Sea (COLREGs).

“Our autonomy systems are built around core principles of capability, reliability and ease of use,” said Sea Machines’ CEO Michael G. Johnson. “This initial Proteus USV demonstration proved the SM300 system performs as promised, and we look forward to our continued partnership with HII supporting current and coming 21st century operational requirements on water.”

The Proteus USV will enable HII’s continued development of autonomy capabilities and sensor fusion to support the evolving needs of both government and commercial customers.