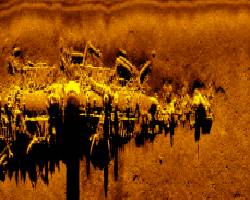 Pocasset, MA – May 9, 2011 – Hydroid, Inc., a subsidiary of Kongsberg Maritime, the leading manufacturer of Autonomous Underwater Vehicles, announced today that its REMUS 100 AUV aided in the discovery of the World War I German submarine U-106, which had been missing since October 1917. The Royal Netherlands Navy (RNLN), which used the REMUS vehicle, located the missing submarine off the coast of Terschelling in the Netherlands.

“The REMUS 100’s compact size and proven reliability for deployment in shallow waters made it an ideal tool for this mission,” said Christopher von Alt, President and one of the co-founders of Hydroid. “It was designed for operation in coastal environments up to 100 meters in depth, and it has a proven track record for durability and dependability.”

In October 2009 the RNLN hydrographic survey vessel HNLMS Snellius located an unidentified object while charting shipping lanes. This was followed two months later by an inspection by a MCMV, the HNLMS Maassluis. A wire-guided Remotely Operated Vehicle (ROV) designed to locate mines, detected the shape of the vessel. The discovery prompted a series of research missions, which employed Hydroid’s REMUS 100 as well as divers from the Royal Netherlands Navy’s Diving and Explosive Ordnance Disposal Group (EOD).

The REMUS vehicle and the EOD divers descended 40 meters in order to explore the area, where a brass plate bearing the serial number of the submarine was eventually discovered. After further exploration as well as confirmations from the German Ministry of Defense and the families of crew members, the submarine was positively identified as the German U-106, which perished during the First World War.

"These findings always happen by chance,” said expedition leader Captain-lieutenant Jouke Spoelstra. “Twelve years ago, a hydrographic survey ship passed the same spot of our discovery, but the German vessel must have still been under a layer of sand. We were lucky to be at the right place at the right time.”

The German SM U-106 was one of the 329 submarines serving in the Imperial German Navy in World War I. It was commissioned on July 28, 1917 under the command of Captain-Lieutenant Hans Hufnagel. The SM U-106 is noted for sinking the HMS Contest during the First Battle of the Atlantic on September 18, 1917, and also for damaging the "City of Lincoln" a 5,867 ton steamer. The U-106 was lost off of the coast of Terschelling after striking a mine on October 7, 1917.

"The ship left behind is an official war grave,” added Spoelstra. “A memorial ceremony may take place at sea but will only occur at the initiative of the relatives.”

“We are very pleased that Hydroid’s REMUS vehicle was able to play a role in this remarkable discovery. We wish to thank the divers and AUV operators with the Explosive Ordnance Disposal Group who succeeded in this mission” said Graham Lester, Director of Hydroid Europe.

Hydroid's REMUS AUVs are modular and may be fitted with a large number of different types of sensors and have been used to aid in hydrographic surveys, harbor security operations, debris field mapping, scientific sampling and mapping, as well as many basic and applied research programs funded by ONR, DARPA and the United Kingdom Ministry of Defense.  With over 200 vehicles in the field, Hydroid is currently the AUV market leader with systems in use by thirteen NATO and other navies around the world.