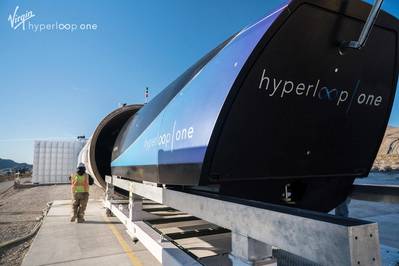 DP World and the U.S.-based Virgin Hyperloop One introduced their vision for “the future of on-demand freight transportation” at an event on April 29 at the historic vessel Queen Elizabeth 2.

The joint venture, called DP World Cargospeed, will set out to be the world’s first to ship cargo with hyperloop technology. First envisioned by Tesla founder Elon Musk as a faster, more cost-efficient form of travel, Hyperloop is a futuristic mode of passenger/freight transport in which pod-like vehicles are propelled through a near-vacuum steel tube at top speeds of up to 300 meters/second. Next-generation magnetic levitation technology combined with a low-pressure tube environment enable the pods to move with little friction very quickly – faster than airline speeds and two to three times faster than high-speed rail.

Virgin Group Founder and Virgin Hyperloop One Chairman, Sir Richard Branson, said, “The global growth of e-commerce is driving a dramatic shift in both consumer and business behavior. On-demand deliveries are a novelty today. Tomorrow it will be the expectation. DP World Cargospeed systems powered by Virgin Hyperloop One will enable ultra-fast, on-demand deliveries of high-priority goods and can revolutionize logistics, support economic zones and create thriving economic megaregions.”

In 2016, DP World signed an agreement to study a hyperloop route to improve Jebel Ali Port's efficiency, profitability and sustainability.

Now, as part of the first initiative of its kind in the world, DP World Cargospeed systems enabled by Virgin Hyperloop One technology will aim to transport high-priority, time-sensitive goods including fresh food, medical supplies, electronics and more, expanding freight transportation capacity by connecting with existing modes of road, rail and air transport.

“Throughout history, cargo has always been the catalyst for transport revolutions,” said DP World Group Chairman and CEO, Sultan Ahmed Bin Sulayem. “We have made a significant investment in Virgin Hyperloop One because we see the need for a hyperloop-enabled cargo network to support rapid, on-demand deliveries globally. We believe in Virgin Hyperloop One’s long-term vision. They are the right partner to shape the future of global logistics, and we look forward to developing the first DP World Cargospeed systems with them.”

“Collectively, we chose to call our Virgin Hyperloop-enabled cargo solution DP World Cargospeed, because speed is about more than just getting from A to B; it’s about optimizing the entire end-to-end journey,” Lloyd continued. “DP World Cargospeed will offer unprecedented customer experience, reliability and the freedom from having to plan too far ahead.”

The Virgin Hyperloop One system underpinning DP World Cargospeed doesn’t need to be passenger-only or cargo-only. Instead, a mixed-use system fully utilizes system capacity and maximizes economic and social benefits.

Systems are 100 percent electric and can be powered by renewable energy, creating a more sustainable, zero-emissions solution for cargo transport.

“The UAE is keen to be a leading player in shaping the future of the world. Being a pioneer means taking bold decisions that open the way for adopting innovative solutions,” said His Highness Sheikh Mohammed bin Rashid Al Maktoum. “We have big aspirations because we have unlimited mindsets and the confidence that we can achieve whatever we set our minds to.”