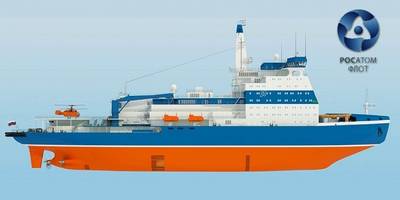 The LK-60 will be the largest and most powerful icebreaker ever built, making commercial traffic along the Northern Sea Route possible all year around.

According to Barents Observer, Russia will have a large demand for new nuclear-powered icebreakers in the near future.  Of the existing six vessels that are operating in Arctic waters today only one will be operational by 2020.

The LK-60 icebreaker is wider than the current icebreakers. It will will have a maximum width of 34 meters, compared to the maximum of 30 meters width at the Arktika class vessels. With such design it will be possible to support larger tankers through the Northern Sea Route.

With its supreme power the LK60 will be able to maneuver through three meters of ice, making it possible for Rosatomflot to open the Northern Sea Route for commercial traffic all year around.

Sweden-based Furetank announced it has signed a contract for two more dual-fuel tankers. The two 17,999 dwt vessels are scheduled…