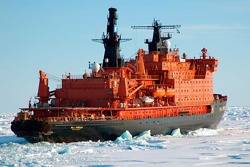 The world’s largest nuclear-powered icebreaker “50 years of Victory” will take tourists to the top of the world five times this summer, starting from June 26. Each trip takes ten days and costs 800 000 rubles (€19 800).

Cruise traffic to the North Pole is very lucrative for Atomflot, says General Director Vyacheslav Ruksha: “It provides us with 70-80 days of work. The contract we had with Rosmorport on work in the Baltic was for 100 days, so the cruise work is just as good”, RIA Novosti informs.

The number of cruise trips to the North Pole will probably go down in the coming years as the traffic on the Northern Sea Route increases and more and more of Russia’s old nuclear-powered icebreakers are taken out of service.

Russia plans to start construction of the largest and most powerful nuclear icebreaker ever built by the end of the year. This will make it possible for commercial traffic through the Northern Sea Route all year around.

Russian icebreakers have been taking tourists to the North Pole 67 times. “50 years of Victory” has been there 12 times so far.

The technology group Wärtsilä said it has been contracted by the City of Duisburg, Germany, to provide the latest in simulator…