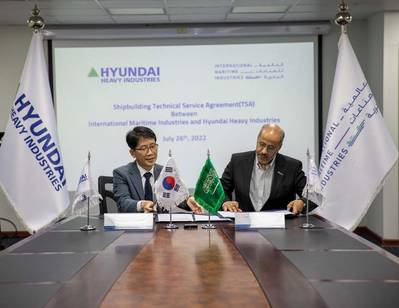 The agreement between the shipbuilders was signed by Dr. Abdullah Al Ahmari, CEO of IMI, and Mr. Ohmin Ahn, Executive Vice President at HHI, at the King Salman International Complex for Maritime Industries and Services in Ras Al-Khair, Saudi Arabia. Photo courtesy IMI/HHI

International Maritime Industries (IMI), the largest shipyard in the MENA region, has expanded its partnership with Hyundai Heavy Industries (HHI) through a technical service agreement to further enhance its shipbuilding capabilities.

Under the agreement, HHI will provide technical assistance and consulting services in Very Large Crude Oil Carrier (VLCC) engineering to IMI, reflecting its commitment to supporting the development of IMI’s shipbuilding capabilities and engineering services since its launch in 2017.

IMI and HHI initiated active dialogues for shipbuilding engineering collaboration in February 2018. Since then, an MoU between IMI, HHI, and Bahri for shipbuilding collaboration was signed in June 2019 and the term-sheet of the technical service agreement was signed in September 2019 in the run up to today's definitive agreement. Earlier this year, IMI expanded its partnership with HHI to enable the construction of naval vessels at its yard in Saudi Arabia.