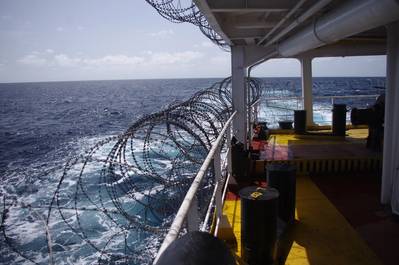 Lim said recent actions made by the West African country to restrain piracy in the region “send a strong and valuable message to the international community”.

The IMO head welcomed the latest initiatives to address maritime security concerns in the Gulf of Guinea, including a recent meeting between the government of Nigeria and representatives from organizations representing the oil and shipping industries. On May 28, the Nigerian Maritime Administration and Safety Agency (NIMASA), Nigerian Navy, oil industry representative OCIMF, and the shipping industry groups ICS, BIMCO, INTERCARGO, INTERTANKO and the Nigerian Shipowners’ Association met virtually to discuss the existing situation and how to tackle the piracy problem in the Eastern Gulf of Guinea and the daily threats faced by seafarers.

“I am deeply encouraged by this initiative, and the positive manner in which both Nigeria and the industry have embraced the value of cooperation and joint working,” Lim said.

He also expressed support to NIMASA’s new Director General, Bashir Yusuf Jamoh, and congratulated the Nigeria Navy on the recent successful operations executed to prevent and deter acts of piracy and armed robbery in the region.

The Nigerian government has been working to establish a framework for the criminalization and punishment of piracy and other maritime crimes in Nigeria and the Gulf of Guinea. Last year, the country became the first in West Africa to implement distinctive antipiracy legislation when President Muhammadu Buhari signed into law The Suppression of Piracy and Other Maritime Offences (SPOMO) Act.

Nigeria's Deep Blue Project, also known as the Integrated National Security and Waterways Protection Infrastructure, aims to tackle insecurity on Nigeria’s territorial waters and in the Gulf of Guinea through a multipronged approach that includes increased officer training and the addition of aerial and surface patrol assets.

On the back of a new partnership between NIMASA and the Navy, the country has made record arrests of pirates, with some already facing prosecution. The Nigerian Navy recently arrested a vessel, MFV Marine 707, which was engaged in illegal fishing in the country’s waters. Ten pirates who had on May 15 attacked and boarded a Chinese vessel, MV HAILUFANG II, off the coast of Côte d’Ivoire and directed it toward Nigerian waters, were also arrested by the Navy.

International Maritime Bureau’s (IMB) Piracy Reporting Center (PRC) recorded 21 attacks in the Gulf of Guinea in the first quarter of 2020, with many more incidents believed to have gone unreported.

Collaboration between risk management and insurance sectors will focus on education, training and guidance to reduce maritime…