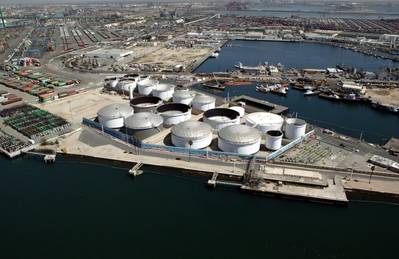 The Port of Los Angeles has released an Initial Study/Notice of Preparation (IS/NOP) — the first step in the Environmental Impact Report (EIR) process — for a Marine Oil Terminal Wharf Improvements Project at the Valero Terminal on Mormon Island in Los Angeles Harbor.

The primary goal of the proposed project is to comply with the Marine Oil Terminal Engineering and Maintenance Standards (MOTEMS) to protect public health, safety, and the environment, which involves demolition of the existing 19,000-square-foot timber wharf at Berth 164 and construction and operation of a new, MOTEMS-compliant wharf, with minor infrastructure improvements to connect the new loading platform to the existing landside pipelines and utilities. The proposed Project would also include a new, 30-year lease through 2047.

The IS/NOP is available for review on the Port of Los Angeles website at www.portoflosangeles.org. The IS/NOP is released for public review to solicit feedback, which helps to identify any potential environmental impacts and suggest possible alternatives for the project that can be incorporated into the EIR.

The Port will hold a public meeting to receive comments on Wednesday, August 3, at 6 p.m., at the Port of Los Angeles Administration Building, located at 425 S. Palos Verdes Street, in San Pedro. Simultaneous Spanish translation services will be provided.