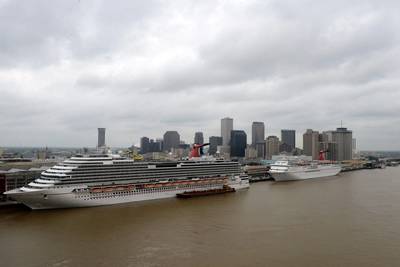 New Orleans’ largest year-round cruise ship, the 3,646- passenger 'Carnival Dream', has sailed on its inaugural 6-day cruise from New Orleans. The Port explains that Carnival is the port’s largest cruise operator with two ships carrying more than 400,000 passengers annually – the most of any cruise line.

The special six-day voyage, visiting Costa Maya, Mahogany Bay (Isla Roatan), and Cozumel, left from the newly refurbished Erato Street Cruise Terminal, which has undergone a $2.3 million upgrade to accommodate a ship as large as the 130,000-gt Carnival Dream.

The Port of New Orleans adds that according to a study by Cruise Lines International Association (CLIA) spending by Carnival and other cruise operators in Louisiana topped $399 million in 2012, generating 7,548 jobs and $294 million in personal income. CLIA also ranked New Orleans the sixth largest cruise port in the U.S.

“New Orleans is one of our most popular homeports and Carnival Dream provides vacationers with a spectacular ‘Fun Ship’ cruise option from the Big Easy offering an incredible array of on-board innovations,” said Gerry Cahill, Carnival’s president and CEO. “Further, the arrival of Carnival Dream significantly expands our capacity in New Orleans, which is a direct result of the combined efforts of port and local officials and our valued travel agent partners who have been instrumental in supporting our New Orleans cruise program,” he added.