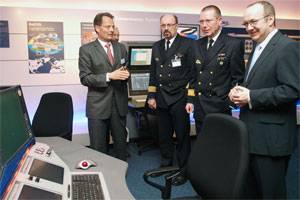 The new center is designed to showcase and demonstrate the company’s products and systems from the world of naval technology. The exhibits will include, for example, long-range sonars, command systems for submarines and surface vessels, unmanned underwater vehicles, and systems for detecting and destroying sea mines. Complex systems for monitoring and securing harbors and coasts will also be on display.

“Atlas Elektronik in particular and the German industry in general will continue to play a vital role in providing our operational forces with the effective platforms they need to fulfil their missions successfully and safely,” said Captain Werner Lüders, Director of Naval Armaments and Logistics, German Navy.