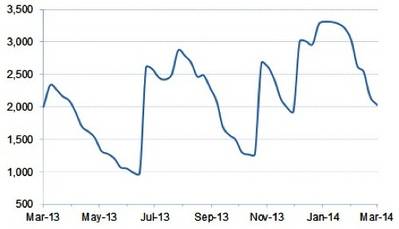 According to Freight Investor Services, which specialises in helping contracting parties soften market volatility through hedging, shipper interest in Index-Linked Container Contracts (ILCCs) has increased significantly during the past 12 months. Most of the top 10 global forwarders now have quarterly ILCCs with shipping lines, and the contracts are also becoming more interesting to medium-sized beneficial cargo owners.

The biggest driver appears to be the need to simplify the freight rate negotiating process during periods of high freight rate volatility, as ILCCs provide a good framework for long-term agreements. In principle, carrier/customer relationships are also improved, and customers should get more freight rate stability, particularly where rates are reviewed every three months.

Spot freight rates from Asia to Northern Europe have been oscillating wildly since the middle of last year, in particular, with astronomical 165%, 109% and 56% increases being obtained within one week at the beginning of July, November and middle of December (see chart above). It has put shippers in an impossible position. On the one hand, signing long-term fixed rate deals has become risky as far too much freight might be paid, depending on when their deals are struck, and on the other, playing the spot market has become very unpredictable and time consuming.

Only fixed long-term rates – usually the preserve of big shippers – and hedging avoid freight rate volatility completely, but ILCCs on their own can provide a half-way house based on the limited information so far declared by contracting parties. This is achieved by the contracts incorporating freight rates that track the market similarly to ‘tracker funds’ on the stock market.

The extent to which they reduce freight rate volatility clearly depends on the period over which rates remain valid. Quarterly reviews are better than monthly reviews, and both are better than playing the spot market on a weekly basis.

Based on a survey conducted by World Container Index, only 10% of beneficial cargo owners used ILCCs in the middle of last year, compared to 28% of forwarders and 38% of ocean carriers, so there is much scope for improvement, even though change is in the air, as mentioned at the outset.  In terms of cargo volumes, the proportions were probably far greater due to ILCCs previously being the domain of very big shippers only.