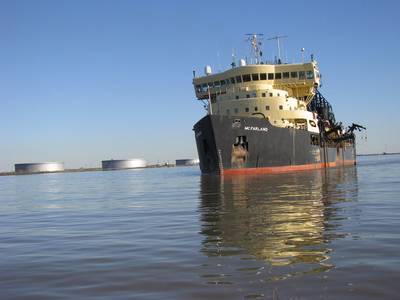 Silt accumulation and dredging that's been postponed for years have prevented the full use of U.S. waterways and ports, maritime industry leaders said last month. Hundreds of U.S. ports and harbors are meant to be maintained by the U.S. Army Corps of Engineers to foster navigation. But many of the country's channels are not kept at their authorized depths, and last year the backlog of needed dredging projects swelled.

Meanwhile, just over half the fees charged to shippers through the federal Harbor Maintenance Trust Fund are spent on maintenance and operations, with the rest going into government coffers. The industry hopes that RAMP Act provisions, devoting HMTF revenues to maintenance and not deficit spending, will be included in the transportation bill that Congress is hammering out now.

Lower Mississippi Tries To Catch Up After 2011 Flood
Sean Duffy, executive director of the Big River Collation in Metairie, La., said in May, “the Army Corps' New Orleans District or NOD has a continuing need for additional funding for dredging. After two Congressional supplements, the district's budget this year totals $156.7 million, and I believe all of it will be used for dredging. That's enough for this year, and much of the year's supplemental funding will be used to try to recover the river's full channel.“

He continued, saying “the channel hasn't completely recovered from historic water levels in 2011, which deposited a record amount of sediment carried downriver.” The areas that the NOD dredges are the Lower Mississippi River or LMR, including the crossings above New Orleans, the New Orleans harbor and the stretch down to the Gulf of Mexico via the Southwest Pass.

“Crossings above New Orleans have a great deal of sediment left from last year,” Duffy said. “But Southwest Pass is in better shape now than it was because dredges have been working there since January.” Captain Mike Lorino, president of the Associated Branch Pilots in New Orleans, said “the district has received enough money this year after supplements, but we're still trying to get the channel back to project dimensions. The river's draft is at 45 feet now but we don't have the width we need.”

The Congressionally authorized dimensions of the river's shipping channel are 750 feet wide by 45 feet deep, according to the Port of New Orleans. Nevertheless, and because of high water in 2011, the channel's width deteriorated to less than 150 feet wide in some sections. “In some spots, the channel is 750 feet wide now, and it's a lot less in other places,” Lorino added. “After recent dredging, the entrance to Southwest Pass is now at a project dimension of 45 feet deep and 600 feet wide,” he said. “That's after we were down to 300 and 200 feet wide last year and early this year. Right now, we have four hopper dredges and one cutter head dredge working the Southwest Pass.”

Meanwhile, “material from the cutter head dredge in Southwest Pass is being pumped to build the lower delta of the Mississippi River,” as Louisiana tries to save its wetlands, Lorino said. “And a hopper dredge in Pass A Loutre is dumping mud for beneficial use” or land building.

“We're expecting to see a slight rise in the river this summer and more dredging will be required then,” Lorino said. “We have all the funds we need but don't have adequate equipment for the channel at this time.” Lorino said equipment is always a problem. “There isn't enough of it across the country,” he noted. “And if the HMTF starts to be used for its intended purposes, we'll need a lot more equipment,” he said, referring to the RAMP Act that Congress is now considering.

Duffy said “there are only ten hopper dredges in the nation--including dredges owned by the Army Corps and industry--that can work in the lower Mississippi River. And that equipment is also needed to restore and deepen drafts of coastal ports in other areas.” Meanwhile, “in the Great Lakes, they use different types of dredging equipment than on the LMR,” he said.

Great Lakes Ships Underused Because Of Excess Sediment
Glen Nekvasil, Ohio-based vice president of the Lake Carriers' Association (LCA), said “Great Lakes ports and waterways have over 16 million cubic yards of sediment that need to be dredged before ships can carry full loads again.” Ships are leaving lake ports with unused hauling power. “Our largest vessels are designed to carry more than 70,000 tons each trip, but because ports aren't dredged to project depths we're losing more than 6,000 tons per trip. These big ships on the Lakes make about 50 trips a year. So a big ship is losing 300,000 tons or more from what it could be hauling every year.”

Nekvasil continued, saying “we have enough dredging equipment for the Lakes but money given to the Army Corps to dredge is inadequate. The Corps needs $200 million to restore the Lake's navigation system. In April, the Harbor Maintenance Trust Fund had a $7 billion surplus so the money is there but it's not being appropriated.”

Inadequate funding for dredging has hurt the Great Lakes shipping industry and the regional economy. “A few years ago, the biggest ships on the lakes were losing 8,000 tons each trip,” Nekvasil said. “To translate that, 8,000 tons of iron makes enough steel to build 6,000 cars, 8,000 tons of coal produces enough electricity to power Greater Detroit for three hours, and 8,000 tons of limestone is enough to build 24 homes.”

Funds Will Deepen The Delaware River Channel
Dennis Rochford, president of the Maritime Exchange for the Delaware River and Bay, said “the Delaware River channel is maintenance dredged to 40 feet all year, so we're in pretty good shape for ships running up and down the river.” But, he added “of course it would be a huge help if Congress approves the RAMP Act so that we're assured of maintenance funding.”

Rochford said “our major interest is channel-depth projects now, and we're lining up federal and state funds.” In April, the U.S. House Subcommittee on Energy and Water approved $29.45 million, which was most of the $31 million requested by President Obama, to deepen the Delaware River’s main shipping channel to 45 feet. In February, $16.9 million was included in the Army Corps' fiscal 2012 budget for expanding the Delaware's channel from 40 feet to 45 feet.

That funding is needed for initiatives in the works, including the Philadelphia Regional Port Authority's Southport complex; a new port at Paulsboro, NJ; and the proposed expansion of the Port of Wilmington, Del. Meanwhile, the Delaware River port complex is big business, contributing $6 billion to the regional economy and providing 75,000 jobs. Rochford said federal funding sends a message to the global community that “Delaware River ports are competitive and able to do business in a post-Panamax ship world.” Post-Panamax ships, which include   the biggest container ships, have been too large for the Panama Canal. But the canal will accommodate those vessels when its widening and deepening is complete in 2014.

Industry Wants The RAMP Act Passed
In late May, Nekvasil said “we, along with so many others, are pushing legislation that will require the HMTF to spend what it takes in each year. House and Senate conferees on the Transportation Reauthorization bill are being encouraged to include RAMP Act provisions and to require that funds in the HMTF be used for dredging and port projects and are not raided for other uses.” The RAMP Act was introduced by U.S. Congressman Charles Boustany of Louisiana in January 2011. RAMP is short for Realizing America's Maritime Promise.

The Harbor Maintenance Trust Fund, authorized by the Water Resources Development Act of 1986, levies an ad valorem tax on channel users to pay for operations and maintenance on commercial waterways. The 0.125% tax on the declared value of imported commercial cargo and on passenger vessel tickets is collected by the U.S. Customs Service for the Army Corps.

Rochford noted that of the $1.5 billion credited to the HMTF yearly, only $800 million of it is used for maintenance and operations and $700 million ends up in the federal treasury. Duffy said in late May “Congress is working on a transportation bill before authorized funding runs out at the end of June, and it includes an amendment by Congressman Boustany similar to his RAMP bill.” The amendment mandates that HMTF money be spent on dredging and other harbor maintenance.

A bill passed without RAMP language would be bad news for the maritime industry, Duffy said. He added “some politicians want HMTF money for purposes other than dredging. But we as a nation must look at maintaining Congressionally authorized dimensions on our waterways, before repairing or building port infrastructure. We can do that in part by fixing the HMTF and using the money to restore and maintain our channels.” He said other ways can be found then to pay for lock repairs, terminal construction and expansion, and anything else that has to be done before the expanded Panama Canal opens in 2014.

“Trade and terminals are very important but we have to fix the HMTF first to utilize what we already have,” Duffy said. Vessels designed to carry larger loads on fewer trips are expected to move through the expanded Panama Canal. “To accommodate the new super ships, channels must be dredged to at least 50 feet, the controlling depth of the new canal locks,” he said.

From the pilot’s perspective, Mike Lorino insisted that more dredging equipment is needed in the U.S. to fill a current shortage and to meet future, shipping industry requirements. “If we get full allocations from the HTMF, then dredging contractors will be able to justify investment in additional dredging equipment,” Duffy said. “The HMTF remains the most critical, first step for our water arteries of trade as they prepare to capitalize on the Post-Panamax economic future.”

Army Corps' Budget Will Decline In Fiscal 2013
The Obama Administration submitted a budget for the U.S. Army Corp for fiscal 2013--which begins this Oct. 1-- $4.731 billion, or 5 percent below FY 2012's appropriation. Within that, the Administration requested $2.398 billion for the preservation, operation, maintenance--including maintenance dredging--and care of existing river and harbor projects. That amount is down by less than one percent from fiscal 2012's appropriation of $2.412 billion. Nonetheless, a March 23 memo from the U.S. House of Representatives Committee on Transportation and Infrastructure warned that underfunding operations and maintenance, and then seeking supplemental appropriations as needs arise complicates planning and is inefficient. The anemic federal funding proposal therefore underscores the importance of the RAMP act for shippers and operators alike. For U.S. rivers, harbors, dredging firms and their customers alike; the stakes have never been higher.

+ Taken from the June print edition of MarineNews magazine +