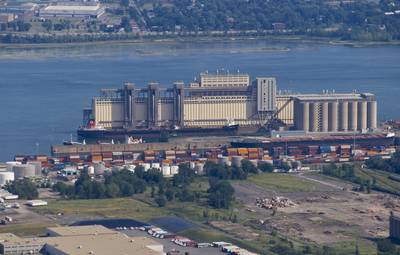 Dockworkers at Canada's second largest port on Monday began their second strike in less than a year, as business leaders urged Ottawa to quickly end a walkout they said could cost the economy C$25 million ($20 million) a day.

The federal Liberal government said on Sunday it would introduce special legislation to end the strike at the Port of Montreal, hoping to stop it from hurting the economic recovery from the COVID-19 pandemic.

Unionized workers, in talks for a new contract since 2018, started a partial strike last week and warned they were prepared to walk off the job completely to protest changes to their work schedule.

The center-left minority Liberal government needs the support of one opposition party to push through the legislation. The left-leaning New Democrats and Bloc Quebecois both said they would not support it.

The official opposition Conservatives, who have generally supported the idea of forcing an end to strikes in key industries, said they would study the law before deciding.

Both sides said they were meeting on Monday with a federal mediator.

The Canadian Union of Public Employees Quebec's 1,125 longshore workers had already refused to work weekends and nights after rejecting an offer in March from the Maritime Employers Association.

"A labor stoppage would not only prevent goods from passing through the port but would also create congestion at other ports," said Perrine Beatty, chief executive of the Canadian Chamber of Commerce.

The Montreal Port Authority said it handles C$275 million worth of goods daily.

"This strike is going to have massive detrimental effects on the Canadian agricultural sector," said Dwight Gearing, president of DG Global, a major shipper of soybeans.

The dockworkers' last strike in August 2020 lasted 19 days and had a ripple effect on supply chains.