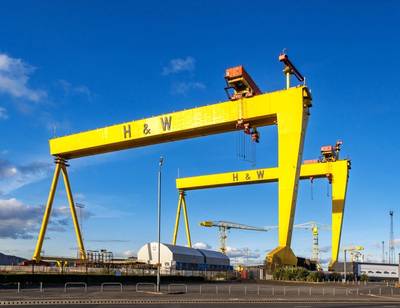 The company, which in 2019 bought Harland & Wolff, the Belfast shipyard that built the Titanic, has said it has over the past year and a half proceeded through various phases which have included, the acquisition of assets, significant upgrades to all its facilities, the introduction of state-of-the-art technology and has simultaneously established a substantial sales pipeline.

"The company is now at its final stage of full reactivation of all its yards, which involves building a multi-year backlog for its facilities across its five key markets: defense, cruise, and ferry, commercial, renewables, and energy. The company believes that this change of name will better reflect its ambition in expanding its core business and the significant development of its shipbuilding and fabrication activities," Infrastrata said.

While the project now has substantially more life expectancy with the need for major volumes of hydrogen storage (subject to regulatory approvals) it is a relatively straightforward technical change to make in a phased approach as the project transitions from gas to hydrogen over time, the company said.

It is expected that the Company's shares will trade under the new TIDM (stock ticker) of "HARL".

John Wood, CEO of InfraStrata plc said: "We are delighted to make this announcement today, signaling the end of upgrade and reactivation phases. With the new national shipbuilding strategy due to be released in the autumn and the government's 10-point plan for a Green Industrial Revolution, we have confidence that the shipbuilding and fabrication business will deliver substantial value to all our stakeholders as we enter this exciting new stage of building our multiyear backlog of projects."

"Since acquiring Harland & Wolff in December 2019, we have seen the organization grow significantly; in August 2020 we reopened what is now known as Harland & Wolff (Appledore) and in February 2021, we acquired two ex-BiFab sites based in Scotland - now renamed Harland & Wolff (Arnish) and Harland & Wolff (Methil) respectively giving us one of the largest fabrication footprints dedicated to our core markets, in addition to two of the largest drydocks in Europe which at 80% capacity could give sales of in excess of £500m per annum when operational efficiencies have been achieved."

"This is a natural progression in building and further developing the Harland & Wolff brand, our commitments to high-quality jobs across our five markets including the 34 apprenticeships recently announced as well as providing socio-economic investment into local, regional, and national communities."