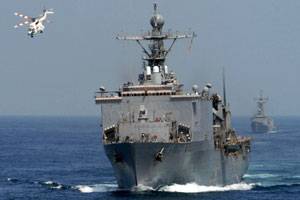 The U.S. Navy began installing stern flaps in April on amphibious ships in an effort make ships more fuel efficient and save up to $450,000 in fuel costs per ship annually.

USS Whidbey Island (LSD 41), the first dock landing ship to receive stern flaps, began the installation process mid-April during a scheduled maintenance availability in Norfolk, Va. The ship is expected to head back to sea in late November.

"A stern flap, located on the aft end of a ship, makes the ship more hydrodynamic, reducing drag and the energy required to propel them through the water," said Petter Kristiansen, Fleet Readiness Research and Development Program (FRR&DP) program manager. "Previous installations on other Navy ships generated annual fuel savings of $365,000 to $450,000 per ship."

The first stern flap installation on an LSD represents a major milestone for Naval Sea Systems Command (NAVSEA) FRR&DP. Once installed fleetwide on both LSDs and LHDs, the initiative is expected to yield an annual cost avoidance of approximately $6.3m, based on fuel oil costing $96 per barrel.

"This is an excellent example of the Navy incorporating a proven, commercially available fuel-saving technology into our ships," said Kristiansen. "FRR&DP examines new technologies that offer reduced fuel consumption and significant return on investment but must be tested and validated before fleetwide implementation.

"In these days of lean budgets and volatile fuel prices, we have to identify programs capable of delivering maximum return on investment. Stern flaps deliver immediate and long-term fuel savings."

USS Kearsarge (LHD 3) is scheduled to receive the first LHD stern flap installation this summer, Kristiansen added. The ship is in a major maintenance overhaul at Norfolk Naval Shipyard (NNSY).